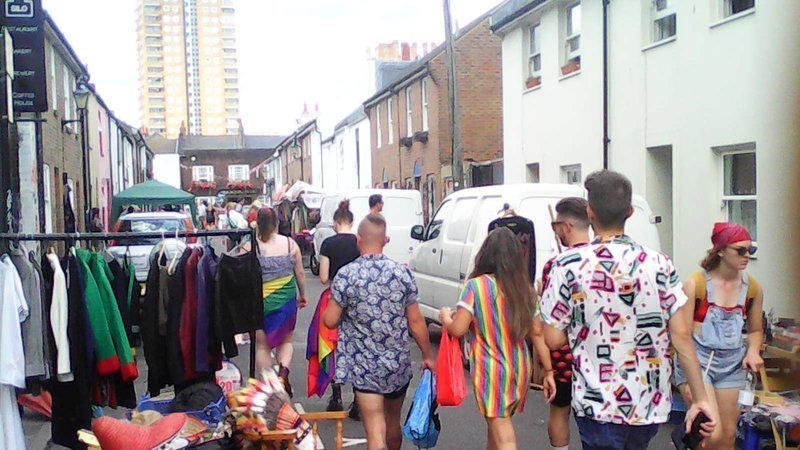 Traders at Brighton’s only regular on-street market are fighting new rules which they say could threaten its future.

At present, the rules at Upper Gardner Street allow traders to spread out from their pitch if there are gaps, so that the market doesn’t look patchy.

But residents have complained that some traders are taking advantage of the rule that you don’t need to keep to your pitch and are blocking the pavement too.

As a result, the council has proposed changing the rules to keep traders to their pitches – and so far, more than 500 people have signed a petition opposing this.

Steve Swain, who has been selling walking sticks at the market since he was a teenager in the 1970s, said that the rule change was proposed after new market inspectors were appointed last autumn and challenged traders when they spread out beyond their allocated pitch.

Mr Swain said: “If you’re down there and the guy next door hasn’t turned up or the council hasn’t let all the pitches, to keep the market looking open and working, we spread out a bit.

“The inspectors came along and said do you realise you’re over the boundary? I said yes, but do you realise that there is a rule in this market that says we are allowed to do that?”

Council rules for on-street pitches state that traders must not encroach beyond their boundary – but there is currently a specific exemption for Upper Gardner Street.

After Mr Swain’s conversation with the inspectors, a letter was sent out to traders on 28 October saying that the Upper Gardner Street exemption was going to be scrapped, following complaints about litter and obstruction.

Traders say there have also been disagreements when residents have left their cars parked along the road on market day, despite signs requesting them to keep the highway clear.

There have been accusations that boxes have been placed on the roof of cars left in the street on market day, causing damage.

Mr Swain said that as news of the rule change spread, many residents approached him to say they were opposed to it – but a letter from one neighbour asking residents to support the changes has been posted through letterboxes.

Mr Swain said: “The market has been here since the 1800s. There are fears that if the changes are implemented, this could spell the end of Upper Gardner Street market as we know it.”

A council spokesperson said: “Officers are proposing making changes to the council’s street trading policy to bring Upper Gardner Street Market in line with other street markets in the city.

“This follows complaints from residents about traders operating outside their specified marked sites and refuse being left at the end of the day.

“The proposals would require the market traders to keep within their marked out sites, and ensure that refuse is stored and removed at the end the day.

“Upper Gardner Street traders are currently exempt from these conditions.

“Pitches for the market currently cost £127.50 per quarter of a year.

“Council officers are currently working through responses to the consultation and a report is due to go before members of the licensing committee in March.”