A Brighton woman who was jailed for robbery is wanted for return to prison, Sussex Police said yesterday (Friday 25 September). 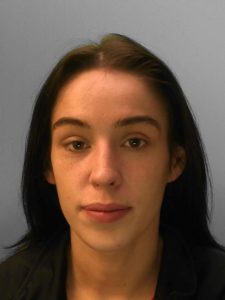 Brooke Brennan, 22, was jailed for nearly three and a half years in May last year after she and her ex-boyfriend partially blinded their teenage victim.

Brennan, who has a son, was released from Downview Prison, in Sutton, in August.

She and Jordan Kelly, 29, of Lower Chalvington Place, Whitehawk, robbed Joshua Prout in Whitehawk Way, Brighton, by the corner of Cooksbridge Road, in March last year.

Brennan bumped into Mr Prout, prompting him to turn around, and Kelly sprayed his face with a corrosive substance, believed to have been ammonia.

They stole Mr Prout’s wallet and iPhone and left him unable to see. His face was scarred and he still couldn’t see properly out of one eye when the case came to court.

The pair were jailed by Judge Christine Laing at Lewes Crown Court on Thursday 30 May last year.

She sentenced Kelly to 17 years, made up of 12 years in prison and five years on licence. Kelly, who previously lived in St George’s Road, Kemp Town, was told that he must serve at least eight years in prison before he could apply for parole.

Police said that Brennan was likely to be in Brighton. She lived in Graffham Close, Whitehawk, before she was jailed and had also lived in nearby Plaistow Close.

Her previous convictions include one for assaulting a police officer in Fishersgate.

Sussex Police said: “Police are searching for Brooke Brennan who is wanted on recall to prison.

“Brennan, 22, was released from HMP Downview on Thursday 20 August after serving a three-year-and-four-month sentence for robbery.

“She is wanted on recall for breaching her licence conditions.

“It is thought Brennan remains in the Brighton area.