A new Brighton restaurant could face restrictions to its licence after an objection from the Friends next door.

Wolfox has applied for a licence for its latest restaurant at premises in Prince Albert Street, Brighton, formerly a shop called Fired Earth.

But a neighbouring property, the Friends Meeting House, is owned by Religious Society of Friends – the Quakers – and they are concerned that noise might disturb the silence during Sunday worship from 10.30am to 11.30am.

The application is due to be decided by a Brighton and Hove City Council licensing panel next week.

A letter on behalf of the group, whose building is set in a walled garden, set out worries about music and noise from extractor fans and alcohol sales.

They are also concerned about the effect of noise on therapists, performers and organisations who hire the meeting house and who may be disturbed.

In the letter, with details of the writer redacted by the council, the Quakers ask that no music be allowed until after noon on Sundays and kept down during the week.

The letter said: “Our meeting house has a well-maintained garden where, as part of our service to the community, we give expression to our values of peace, equality and support for the earth.

“It is a delightful, quiet green space in an area of the city where both quiet and green spaces are rare.

“It is used as a place for repose and reflection by many members of the public from many different backgrounds.

“Small children can have space to move about safely there, with adult supervision.”

Wolfox wants to serve local wine, beer and spirits to about 30 people at a sitting, all seated at tables, from 10am to 8pm.

The company’s application requested a licence to start at 11am each day, ending at 10pm on Monday to Saturday and 9pm on Sundays.

The lease and premises licence if granted will be in the Wolfox Ltd name, but will trade under a different brand.

Representatives from Wolfox have stated its director Fabio Lauro plans a designer shop and café through another of his companies,  Six Studio Design. 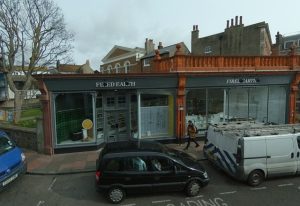 The letter of objection said: “As Quakers, we have a long tradition of not allowing alcohol on our premises.

“The initial application is for a restaurant but, once they have the licence, we fear they might turn it into a pub. They propose to sell alcohol on seven days a week.

“We have concerns about public nuisance: people leaving the premises late at night abusing our garden, making a noise to disturb the peace.”

Prince Albert Street is in a busy part of Brighton and Hove which has been designated a “cumulative impact zone” by the council and where there are restrictions on new alcohol licences.

While the council is not keen to allow any more pubs, clubs and off-licences in the area, food-led venues such as restaurants are more welcome.

The licensing panel, made up of three councillors, is due to discuss the application at a virtual meeting starting at 10am on Wednesday 10 November. The meeting is scheduled to be webcast on the council’s website.