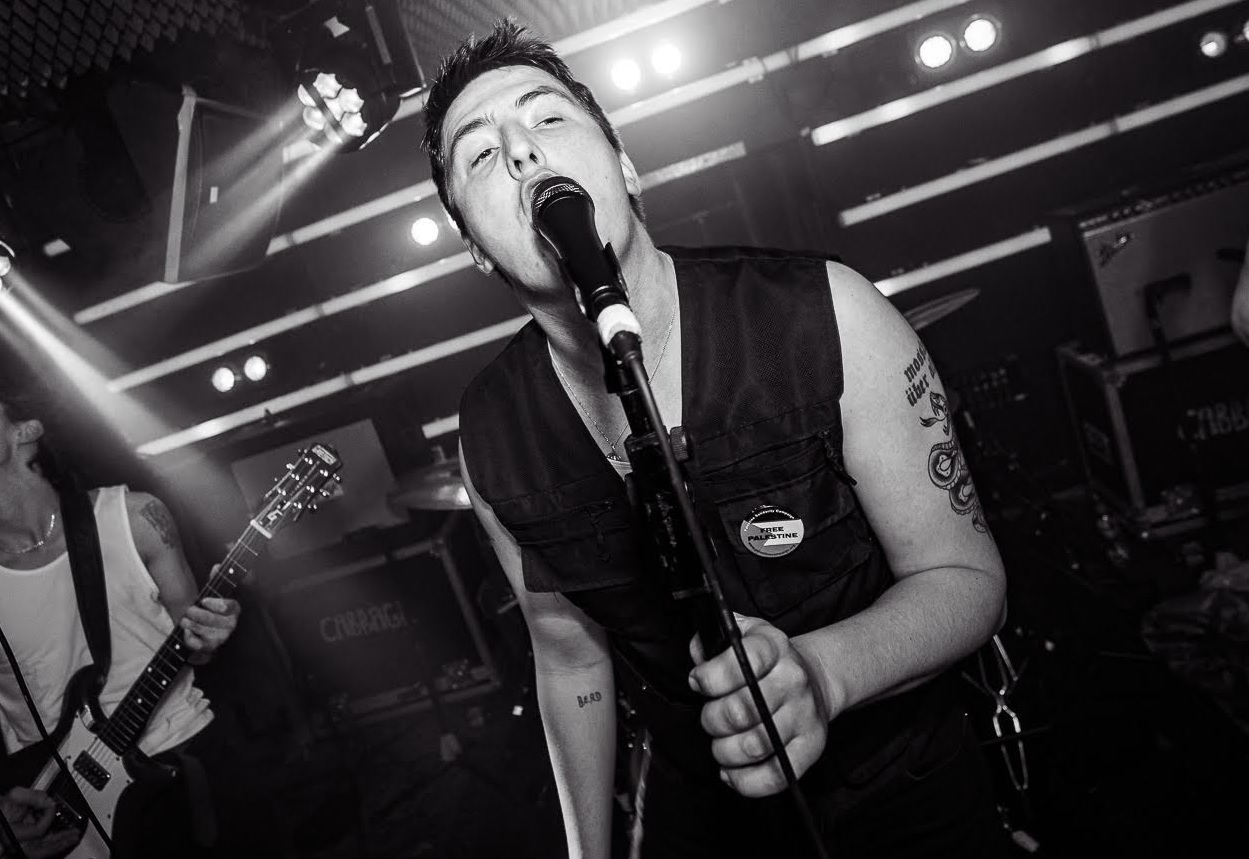 Tonight’s concert at Patterns featuring Cabbage – the Manchester based five piece serving up an idiosyncratic, satirical attack in the form of discordant neo post-punk – was originally scheduled to happen on 28th May this year, but you know what had a massive effect on the music industry in town and around the country and so we are packing out the venue this evening instead. 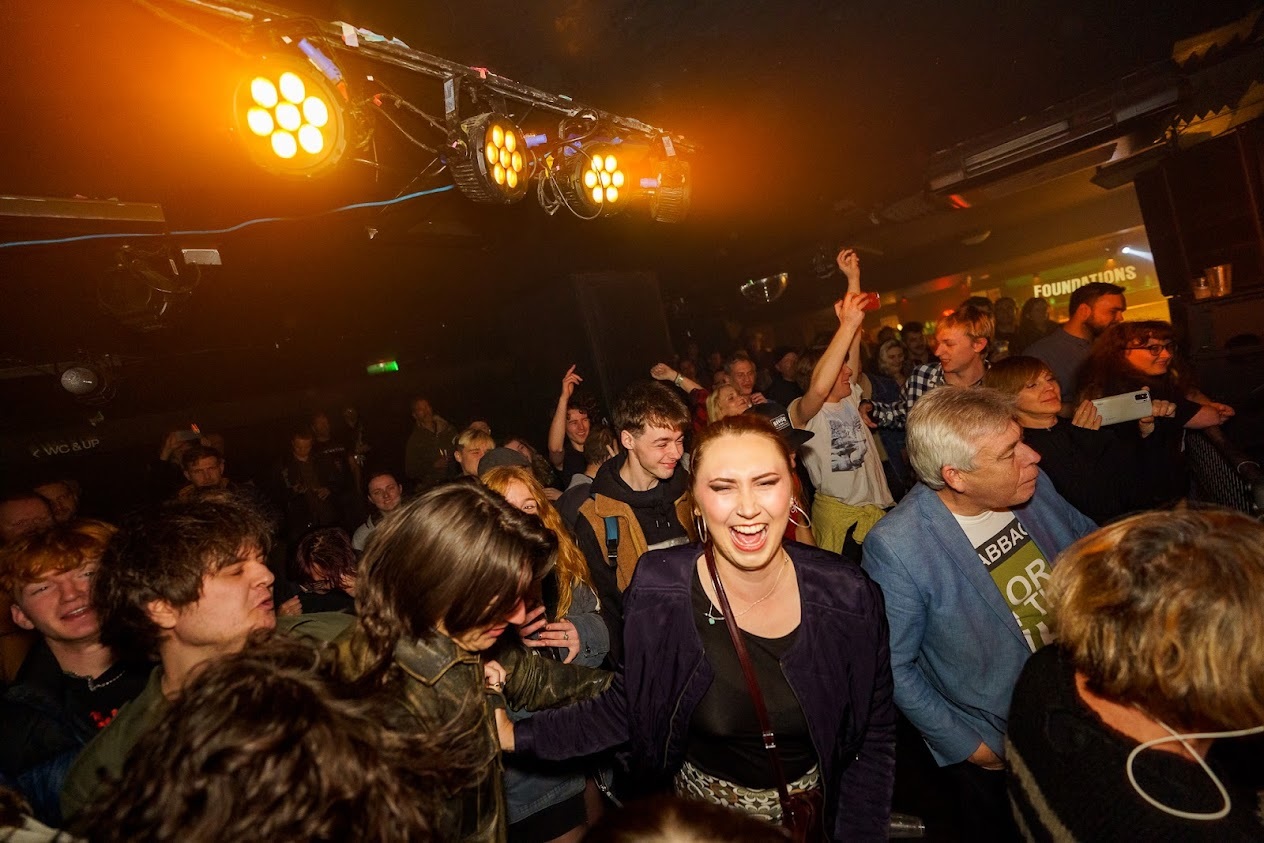 Cabbage are listed as Lee Broadbent (vocals), Joe Martin (Guitar/vocals), Eoghan Clifford (guitar), Asa Morley (drums), and Stephen Evans (bass guitar), but there are six guys on stage this evening. The band formed in 2015 in Mossley in Tameside (one of the vocalists, Lee Broadbent, has a ‘Mossley Uber Alles’ tattoo on left arm and the other vocalist, Joe Martin, has ‘Cabbage’ written on his), but they have decided to call it a day and this will be their final tour and the last number on their latest album is called ‘Terminates Here’ – thus our headline to this review!

Their latest album ‘Amanita Pantherina’ was released on 25th September last year, but thankfully it is still available on limited edition paint splattered vinyl, as well as on CD and signed bundles are available from their official store HERE. 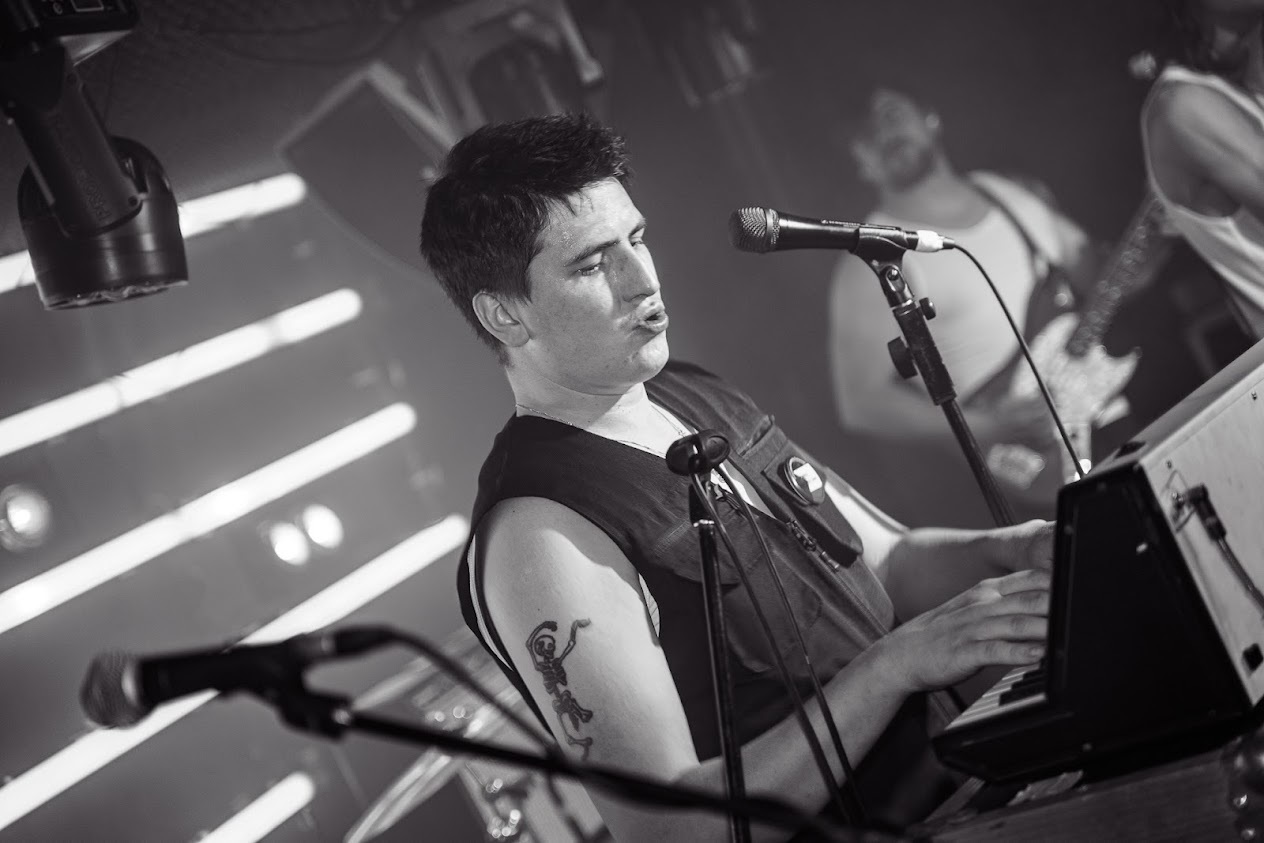 By my reckoning, Cabbage have performed live in Brighton on six previous occasions, the last time being on 3rd May 2019, when they took The Haunt (now CHALK) by storm. The Brighton & Hove News Music Team were in attendance at the time and some of that report of a mighty fine night read as thus:

“Suddenly it became a great start to the set as they blasted out my favourite track ‘Uber Capitalist Death Trade’ where Lee’s vocals are at their best and the energy throughout the band is taken to the highest level possible. This was quickly followed by ‘Fickle’ the second track from the ‘UCDT’ EP, and we were in full flow, as was the alcohol for the young females in the mosh pit which was seemingly giving them mosh pit superpowers as they took on all-comers. I was the recipient of a free drink from one of them as a shot of Pernod, a drink that I don’t have fond memories of having been violently ill some 37 years ago and never recovering from the trauma, was spilt on me resulting in rather sticky arms and an aniseed stench that I never wanted to smell again in my lifetime. Thankfully the set continued at a frenetic rate to distract me from my private hell”. 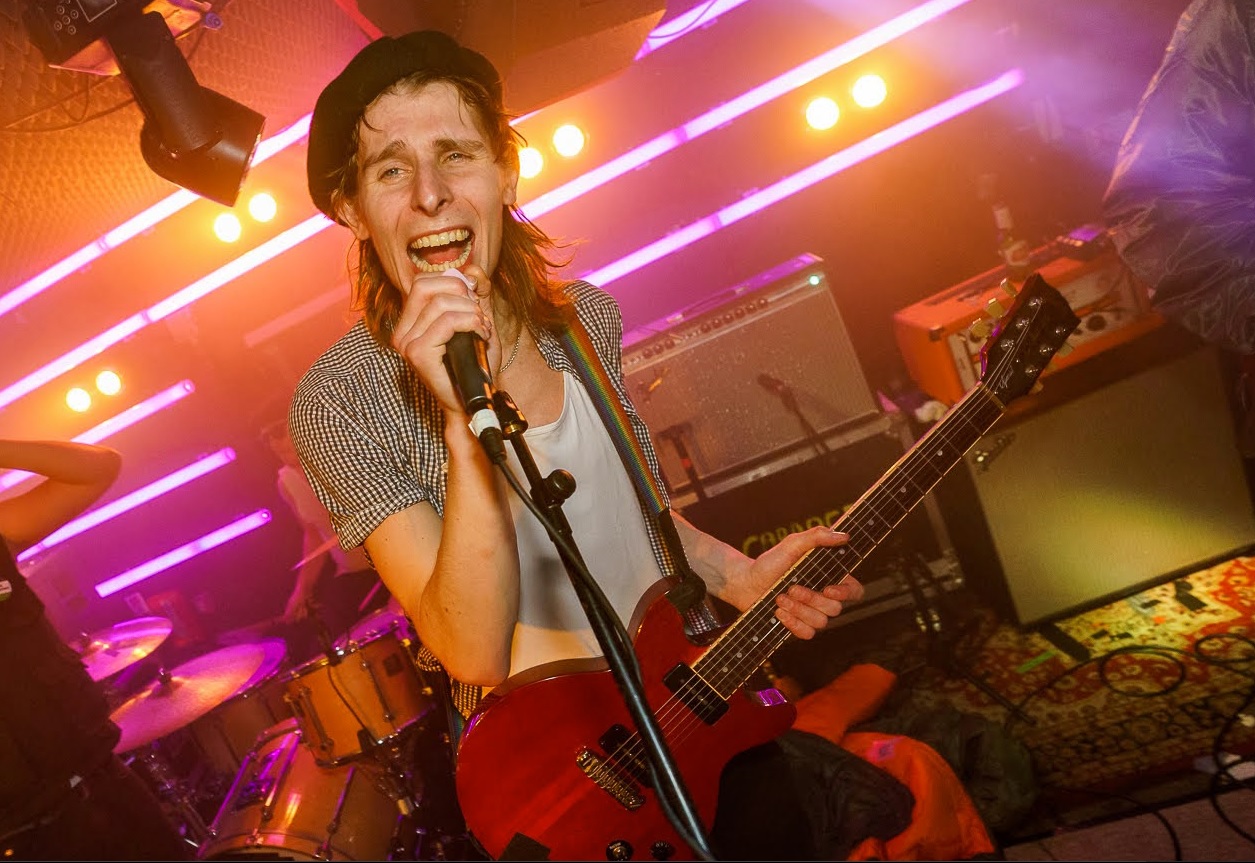 “The set was finished off in true Cabbage style with two of their live show classics, their first single ‘Kevin’ and the wonderful ‘Necroflat In The Palace.’ The whole crowd sang along with passion, verve and anger to the lyric “I was born in the NHS, I wanna die in the NHS.” This was crowned with some topless crowd surfing from Joe”.

Was tonight’s concert at Patterns going to be just as wild? Let’s see………. 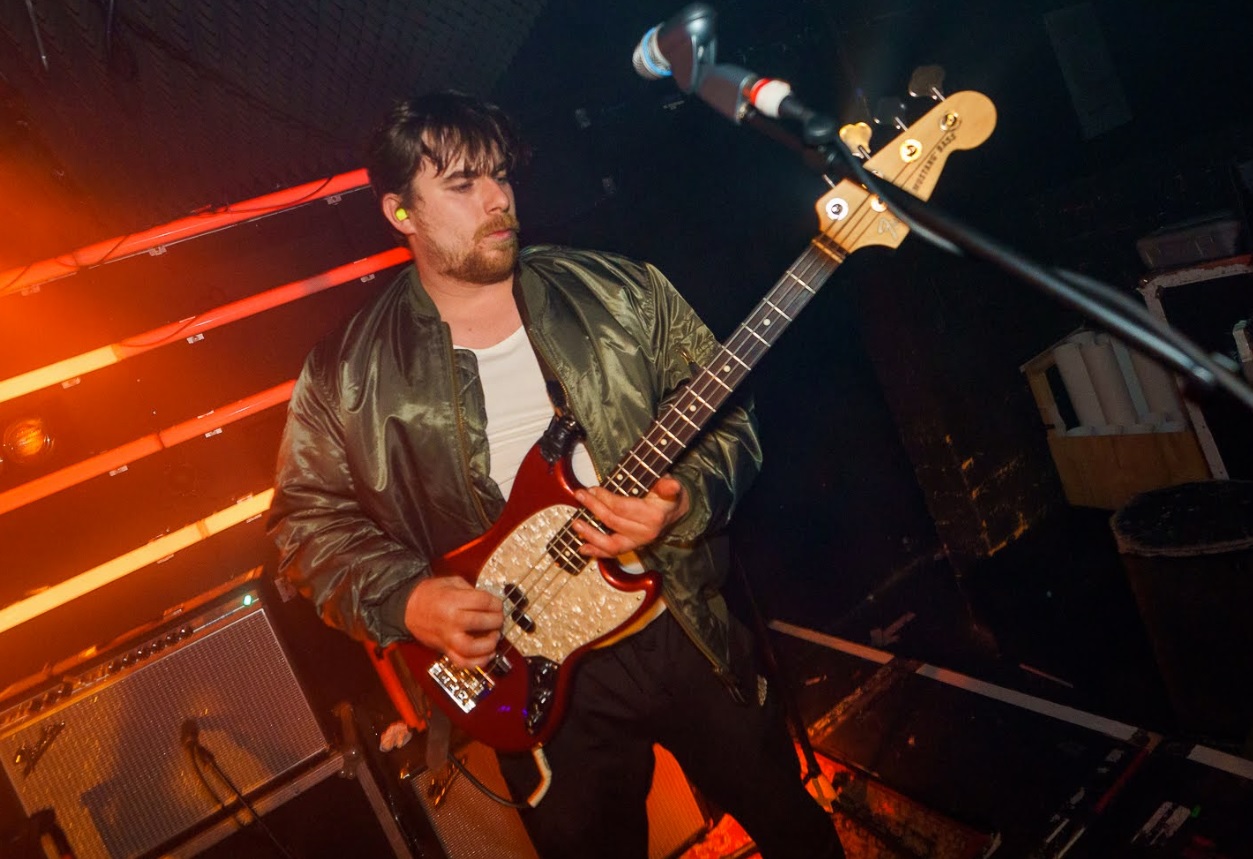 Cabbage performed a 72 minute set for us this evening that consisted of 15 career spanning numbers. For me there were some hits and some misses. They arrived at 8:45pm and confirmed during their performance that this was their last tour and thanked fans for their support during their journey. They said that Brighton was the best in the south and then mentioned Bath, before back-tracking.

On stage were six chaps and their equipment consisted of a retro Korg synth that sadly could hardly be heard (shame!), no less than three guitars including a Gibson Les Paul Jnr guitar, a Gretsch guitar that looked as though it was on its last legs, and another. There was also a Fender Mustang bass and a drum set. Lee Broadbent occasionally used a taxi driver’s old style distortion microphone as well as his normal mic. Joe Martin just used the normal mic as did the others on backing vocals. 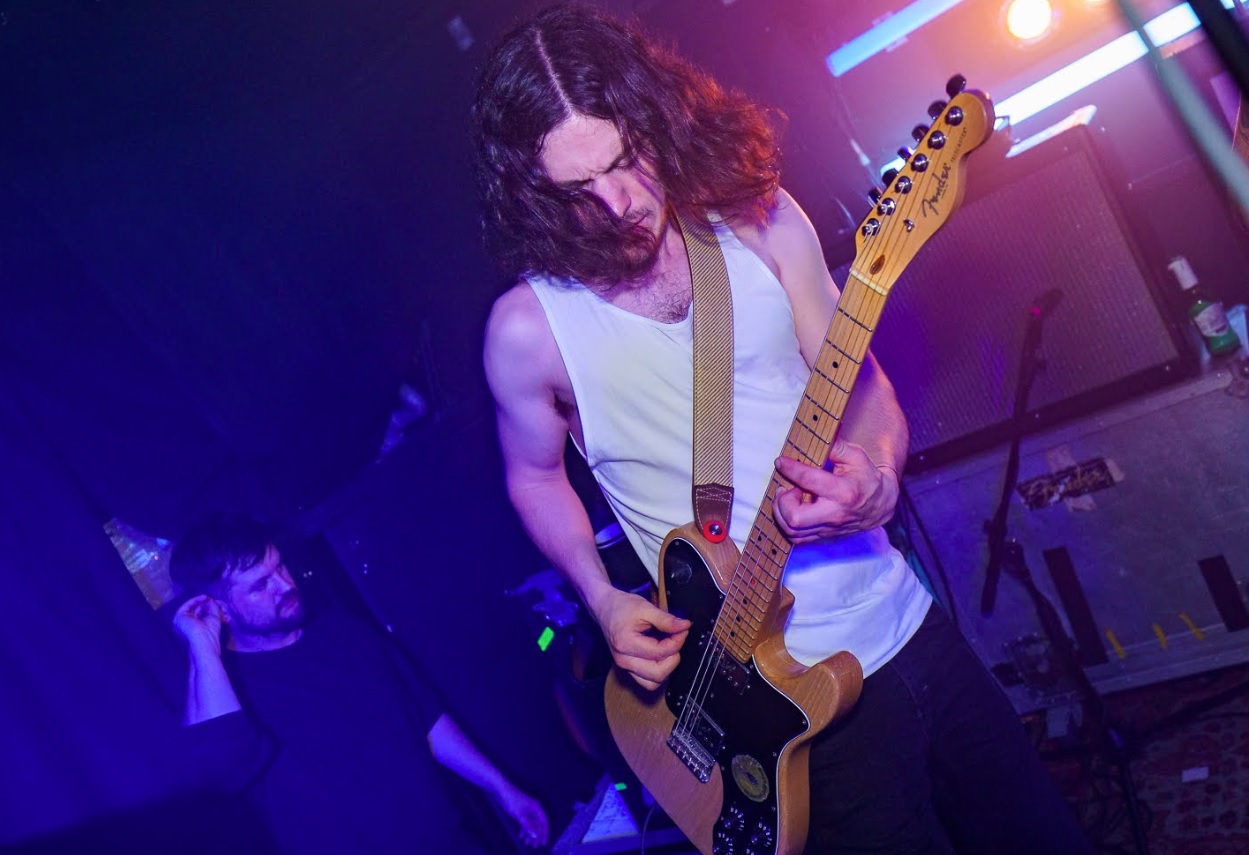 They all arrived clad in the same garb which consisted of black berets, black sunglasses, puffer jackets, under which were white vests. Clearly their uniformity with this lot, that is until they sadly disband. They even shared vocal duties on several occasions during the same track.

They kick off with ‘Dissonance’ and we sadly can’t hear the wonders of the retro Korg. Song two was, as far as I could tell, ‘Arms Of Pleonexia’. This reminded me of the post Sex Pistols band, The Professionals. It was great, but far too short for my liking. ‘Fickle’ was up next and that reminded me of the Arctic Monkeys. The rocky ‘Uber Capitalist Death Trade’ had a welcomed outing next and for me this was the best track so far by a country mile. ‘Once Upon A Time In The North’ from their ‘Amanita Pantherina’ album followed. 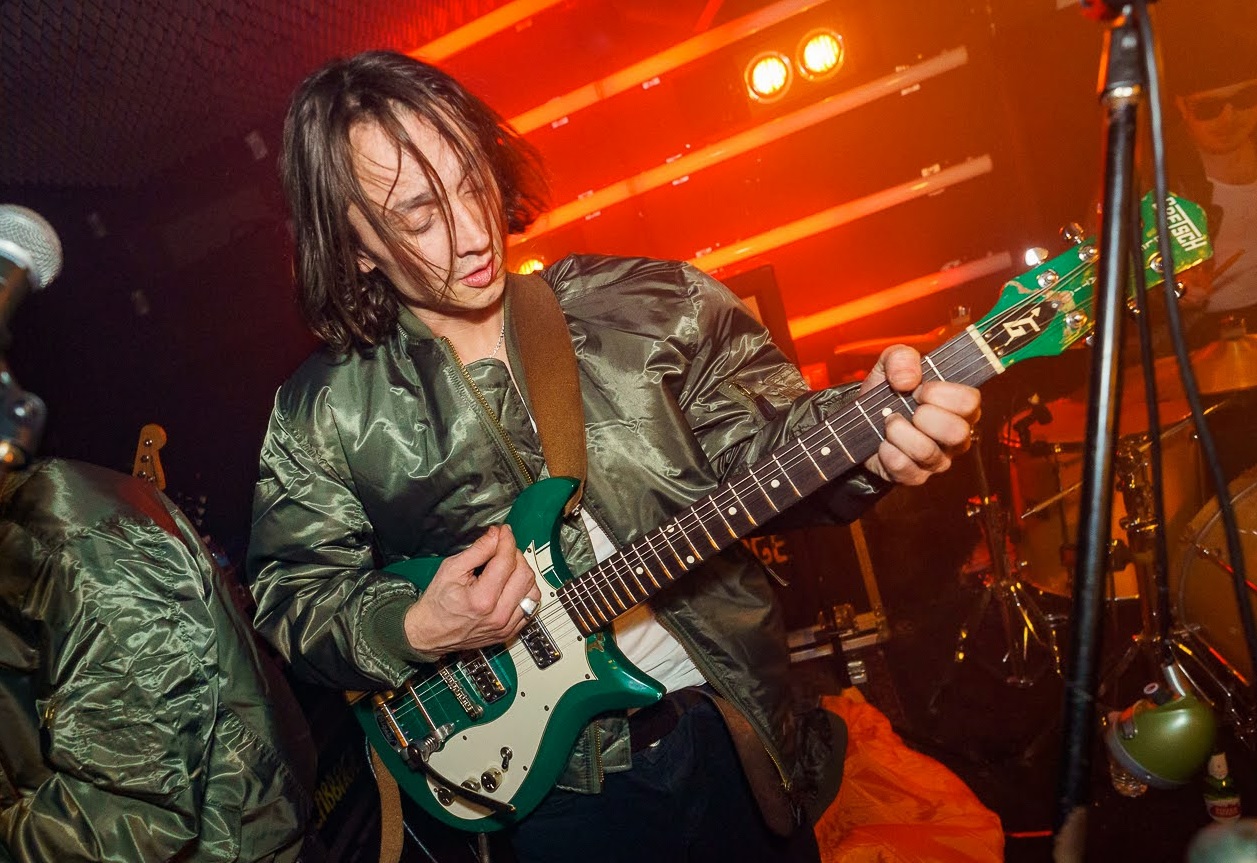 After a few other tunes, we arrived at ‘Kevin’ which was their first ever single. This had a decent retro bouncy beat akin to a louder version of late career Beatles and this was the second best track so far.

Lee informed us they would now play an “Netflix update” of ‘Free Steven Avery (Wrong America)’, which he said got them banned in the USA, and tonight’s version was titled ‘Joe Exotic’ after the fallen and now diseased Tiger King. The backbeat of this is a dead ringer for T. Rex’s ‘Jeepster’. The following number ‘Because You’re Worth It’ was much slower and sounded like a swansong and rambled on far too long and it totally turned me off. They concluded with the much better ‘Necroflat In The Palace’ with the memorable lines “I was born in the NHS, I wanna die in the NHS”. They put down their instruments whilst the mixed aged crowd gave the sextet a rapturous applause. There was no encore and so we were done three minutes early at 9:57pm. 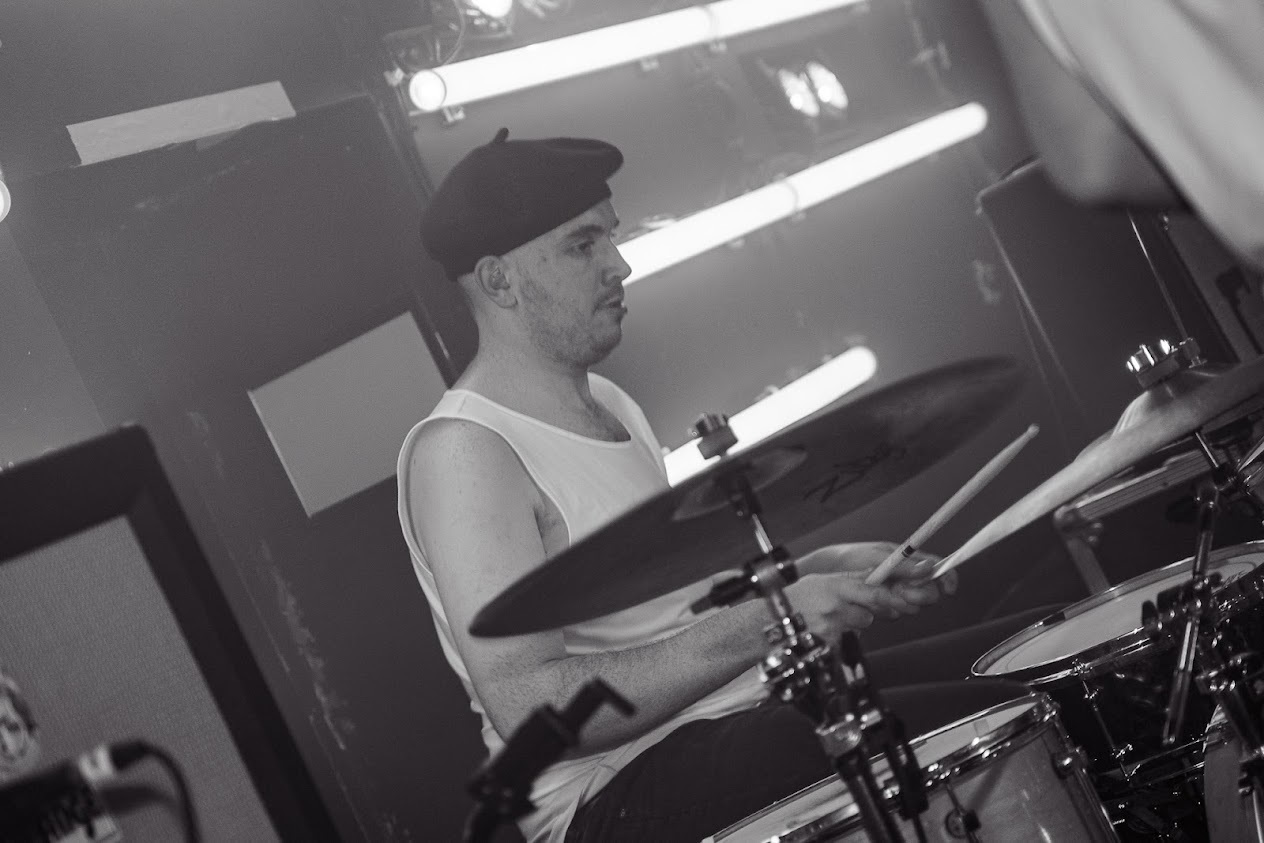 Their earlier work can still be found on Bandcamp HERE. 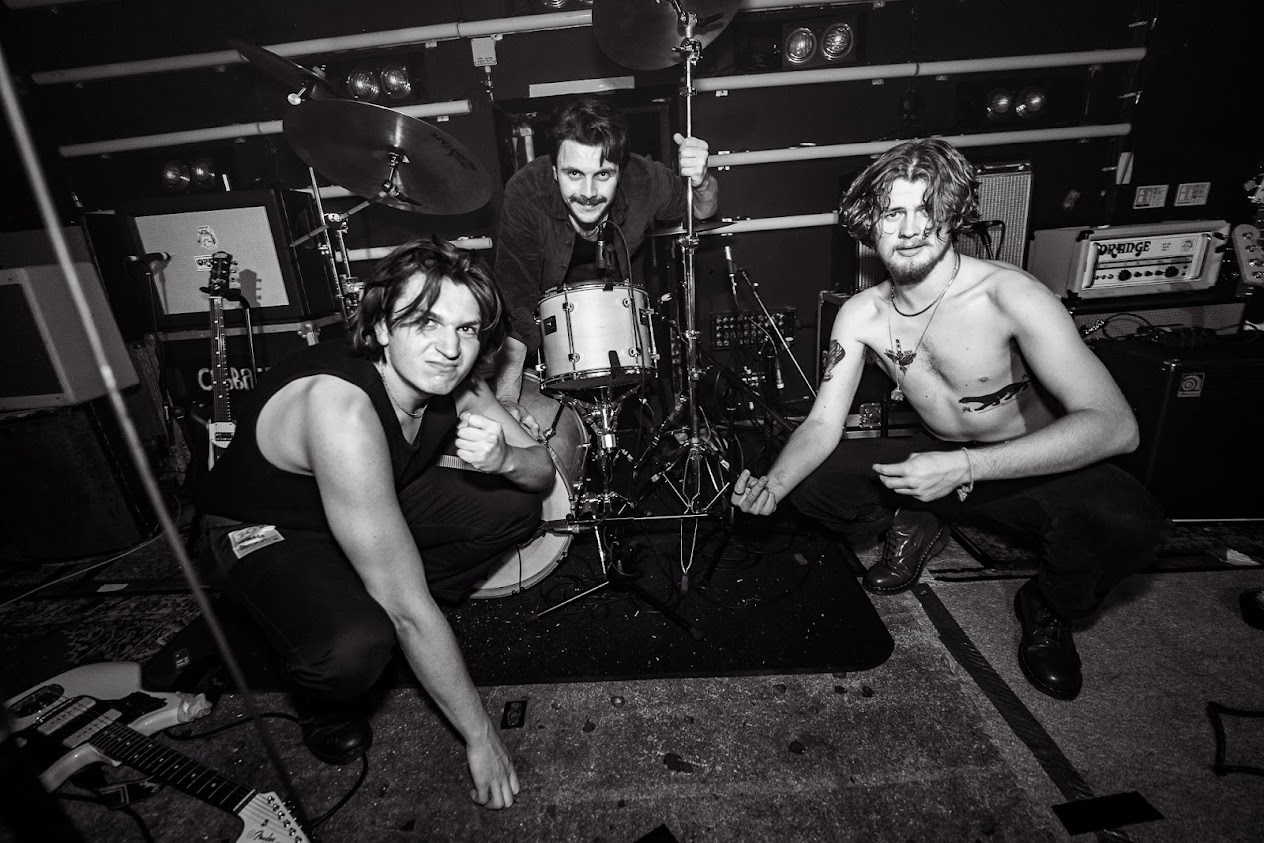 Support this evening came from Brighton rising stars Monakis who were to perform a loud and raucous nine song set.

Monakis are James Porter (bass/vox), Aaron Butler (guitar/vox) and Joe Mctaggart (drums). They took to the Patterns stage at the early time of 7:40pm and then BANG! They hit us right in the face with their terrific energy. 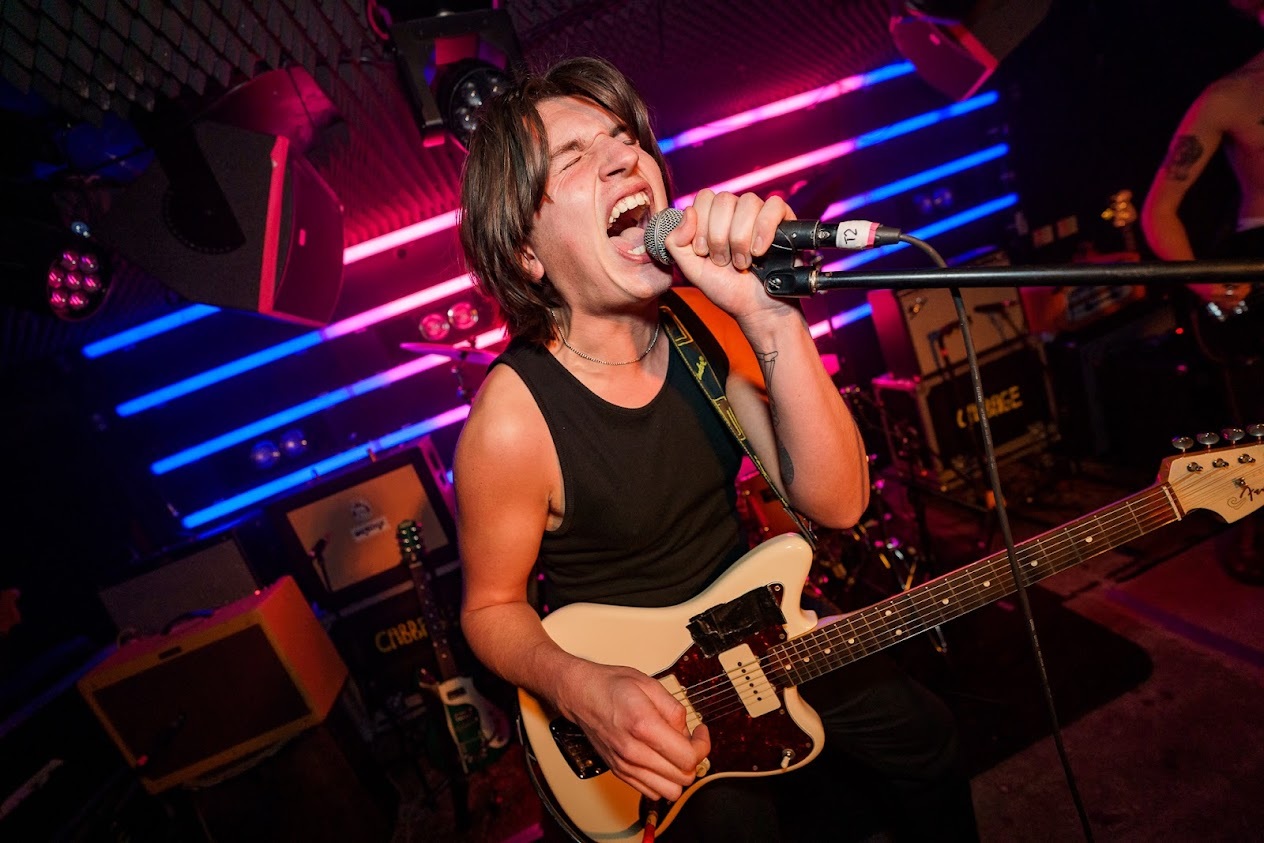 As usual, the vocal duties were shared by Aaron and James and the noise made by just three guys is quite astounding. This brash young fun band played with must bravado and the crowd were having it large! This is exactly the sound that folks are looking out for at the moment – a modern take on punk. Following in the footsteps of bands like IDLES, Fontaines D.C, Thumper and DITZ. As we reported way back in February 2020 “This band is a must! No two ways about it!”.

James was as usual topless and proudly showing off his several tattoos and the top of his Calvin Klein pants were on show too. He was in charge of his Fender bass. Aaron was sporting his trademark black vest and playing his Fender guitar, that mid set needed some magic luminous pink tape attached to it in order to stop it falling down. Drummer Joe was also sporting his vest and gave his drum set a good old seeing too during their set. 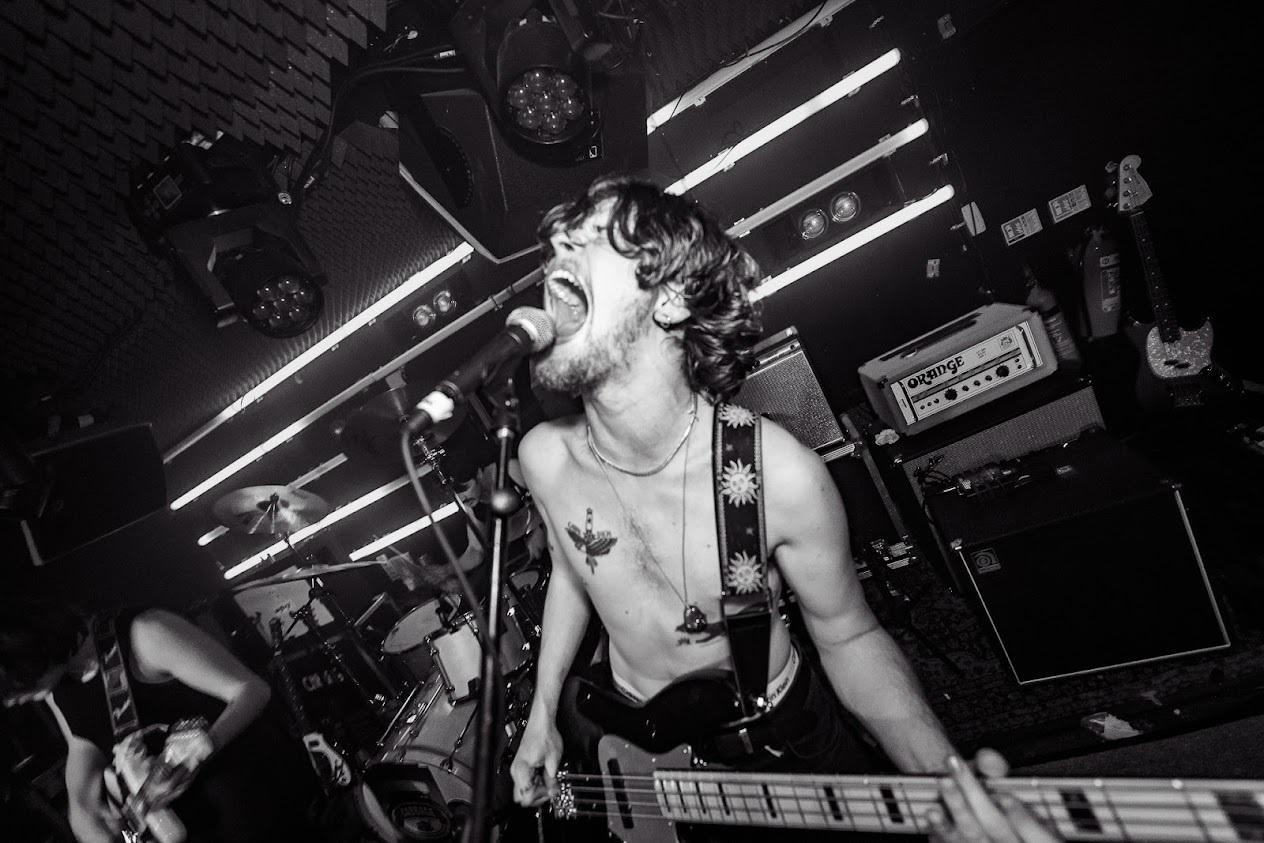 They had come here to rock the joint tonight with their shared vocals that were delivered with pure visceral energy, and that’s what they did. However the Patterns stage is not that high and as a result lads hair kept touching the rotating overhead lighting and I was waiting for an ouch moment, but it never came.

They informed us that ‘Rich’ will be their next single and I love it, so that was an inspired choice. This was followed by a brand new number, ‘Screw Loose’ which starts as a drums, bass and Nirvana-esque vocal delivery and it builds from there. Their final number ‘DripTease’ had Sex Pistols riff and was arguably the highlight of their 25 minute set that ended at 8:15pm. 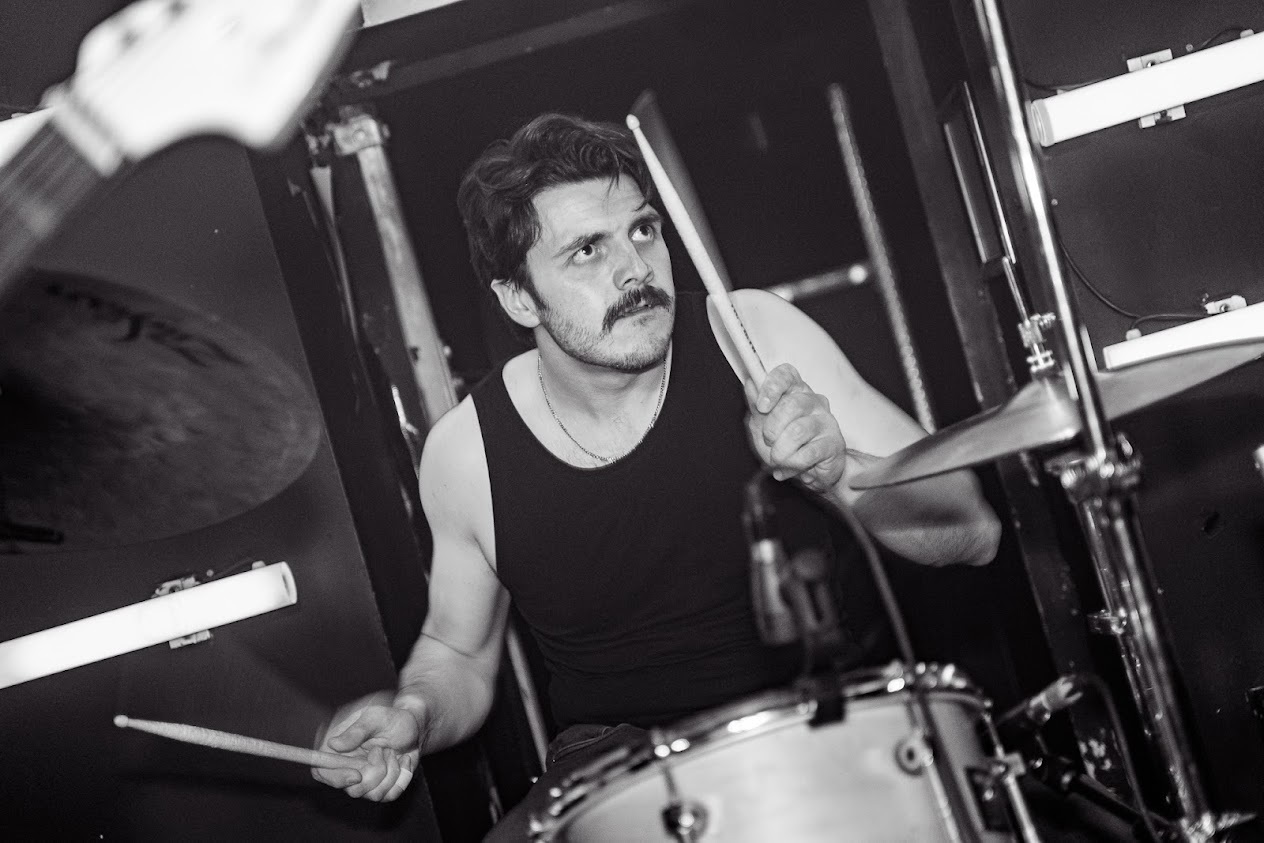 Monakis are going to be an essential part of the local punk scene in 2022 and beyond. You have been warned!

Check them out on Spotify HERE. 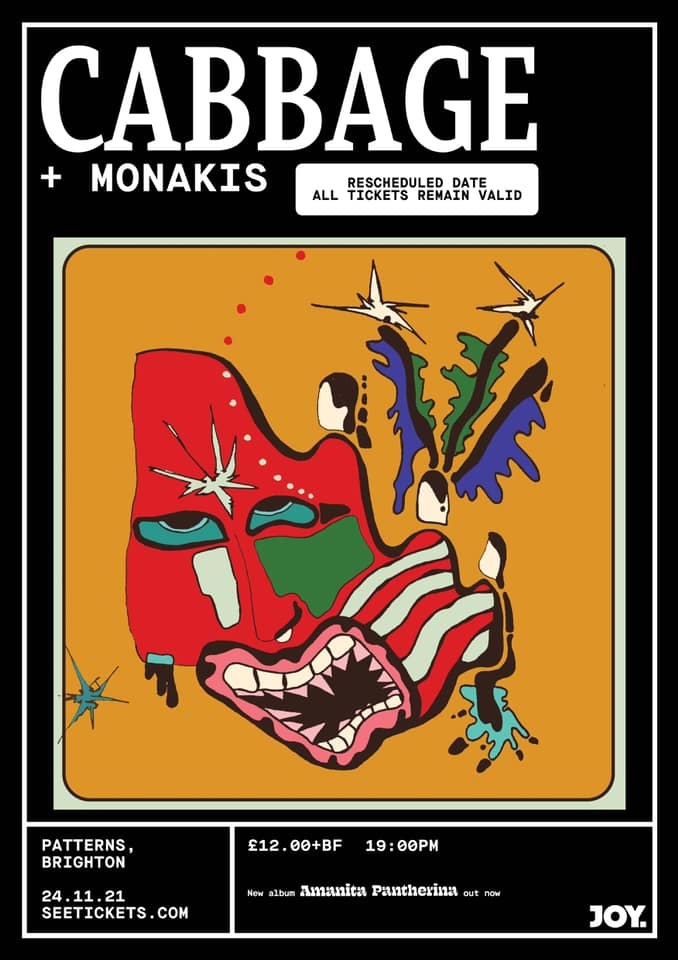 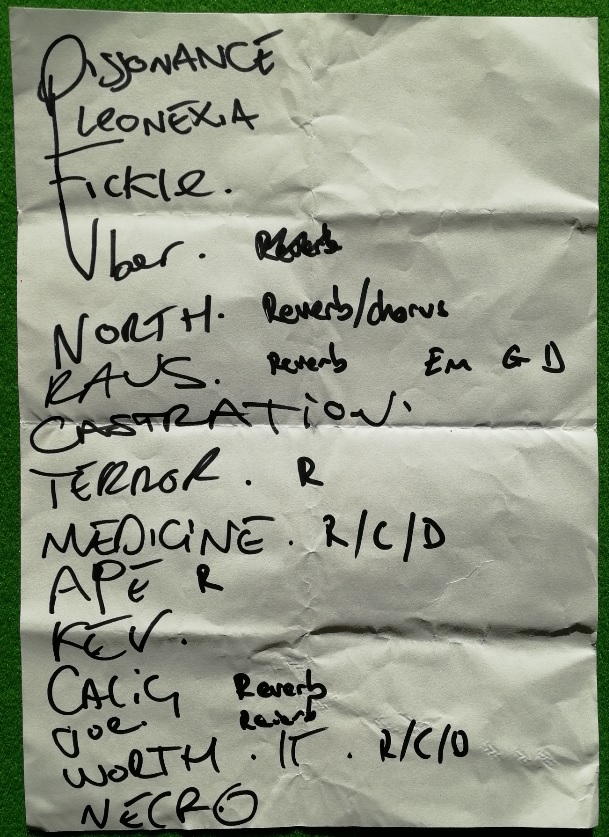 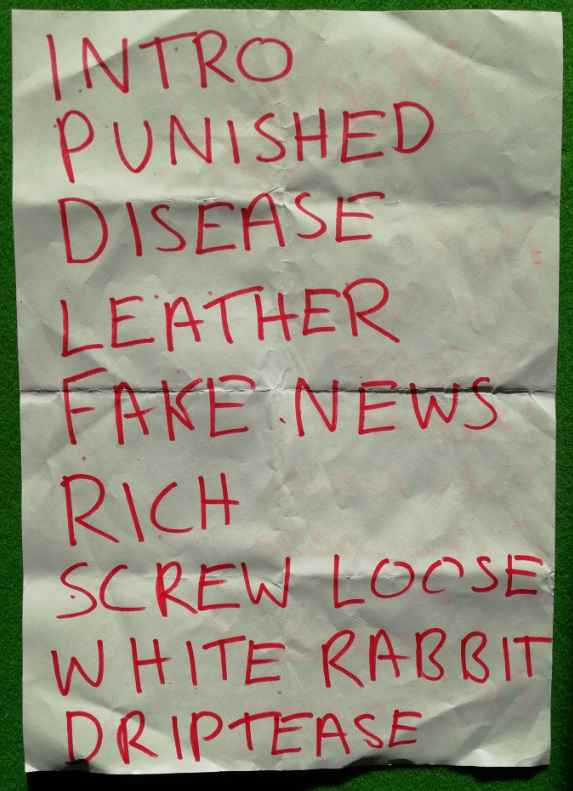 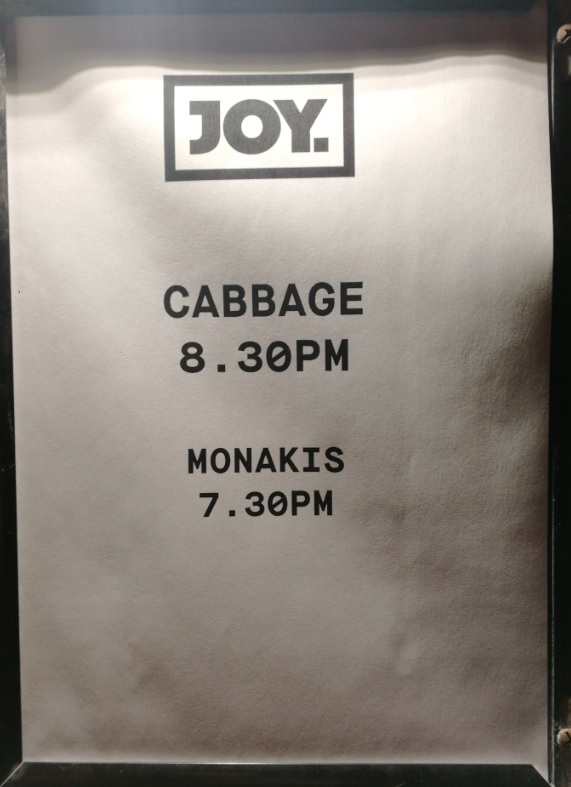