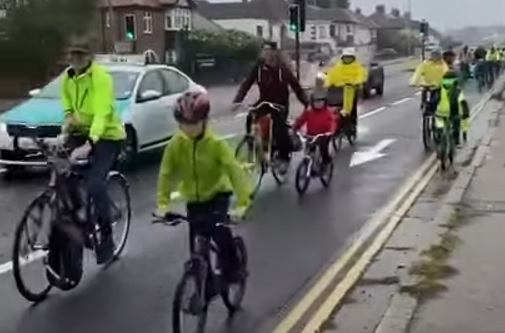 Three times as many people have signed a petition calling for the cycle lane on the Old Shoreham Road to be reinstated as a rival one demanding it ruled out of consideration.

The cycle lane was put in during the first lockdown to boost active travel while people were less likely to use buses and trains.

But it was removed in September after Labour and Conservative councillors voted to scrap it because of complaints from motorists.

The larger petition was started by Hove mum Pascale Palazzo, whose children used the cycle lane to get to school before it was ripped out.

“We need well-planned permanent cycle lanes on the Old Shoreham Road that take into account the needs of current and future cyclists, as well as drivers.

“The petition gives a voice to the thousands of residents, including children, for whom cycling could make a difference. A child bus pass costs over £30 a month, so cycling can save parents a lot of money.

“Children obviously don’t drive and 40% of residents in Brighton and Hove don’t have a car. We need cycle routes to be direct and for main routes to be accessible, as the new government policy describes. We all need and deserve the option of safe, cheap, efficient transport.

“As a specialist in eating disorders and obesity, I feel passionate about activity levels, especially for younger generations, as 1 in every 5 UK ten-year-olds is now living with obesity.

“Cycling can make a huge difference, but children can only do it if it’s safe. The petition has had a great response so far since it launched and we hadn’t expected to see so many signatures.”