Sextile. A band name that might not YET readily spring to mind when thinking of synth or punk bands. However, I have a sneaking suspicion that many more folk will get to hear of this terrific American quartet over the next year or so. The band think so too, as their pin badges read “we are everywhere sextile”.

It all started when Melissa Scaduto (drums/vox) and Brady Keehn (vox/guitar) were originally living in Brooklyn, New York, but then on a whim they took a punt and moved to Los Angeles, California. Within a relatively short period of time the guys met Eddie Wuebben (keyboards/guitar) and Kenny Elkin (bass) and thus in 2015 Sextile were formed. With one minor adjustment, Cameron Michel (keyboards/bass) in and Kenny Elkin out, we have the guys that performed a rip roaring set at Brighton’s Prince Albert.

The band boldly throw convention out of the window to create and genre-bending imprint that combines the raw energy of primitive outer space 70’s punk with the intricate and sophisticated structural elements of 80’s post-punk and retro/modern synth-wave.

What this means is that the guys are full of visceral energy and are just waiting for that imminent spark. At home in the USA, they have built up a loyal following and now they have come to these shores for the very first time in order to win some more.

Tonight’s set was so good that it actually gave me goosebumps! The celestial bodies must have been in alignment or something. This reaction is usually reserved for Kraftwerk and Gary Numan, but no, there it was during their set. They were in all honestly absolutely brilliant. If I didn’t have to write and post this article, I would have been jumping in the car and winging it to the Tom Thumb Theatre in Margate where they are playing tonight (28th January 2018).

I just knew that the lucky punters were in for a real treat, when you see two vintage Korg synths side by side on the left hand side of the stage with a further keyboard on the right and drummer Melissa was going to be standing for the duration of the gig. This was going to be an aural onslaught drilling it’s way into your soul and there’s nothing you can do to resist it.

My signed 2017 ‘Albeit Living’ Sextile album

Singer Brady’s stance at times was culled from the mid 70’s book of rock a la Iggy Pop and Joey Ramone (RIP) and it felt like 1976/7 all over again, but with a modern edge – Lush!

Eight of the tracks from their Prince Albert set can be found on their 2017 ‘Albeit Living’ album, one was from their 2015 ‘A Thousand Hands’ album, they played their brand new 2018 single and three tracks remain unreleased. My personal fave was ‘Ripped’. I can almost hear The KLF signing the words to this.

Alas, their intended final song ‘Can’t Take It’ was dropped.

Sextile are now off to conquer Europe as part of their tour, but I really hope that they return hear very soon, despite it being a little expensive for them. As they say, you have to speculate to accumulate! I for one purchased both of their albums and got them signed by all the band – Happy days! 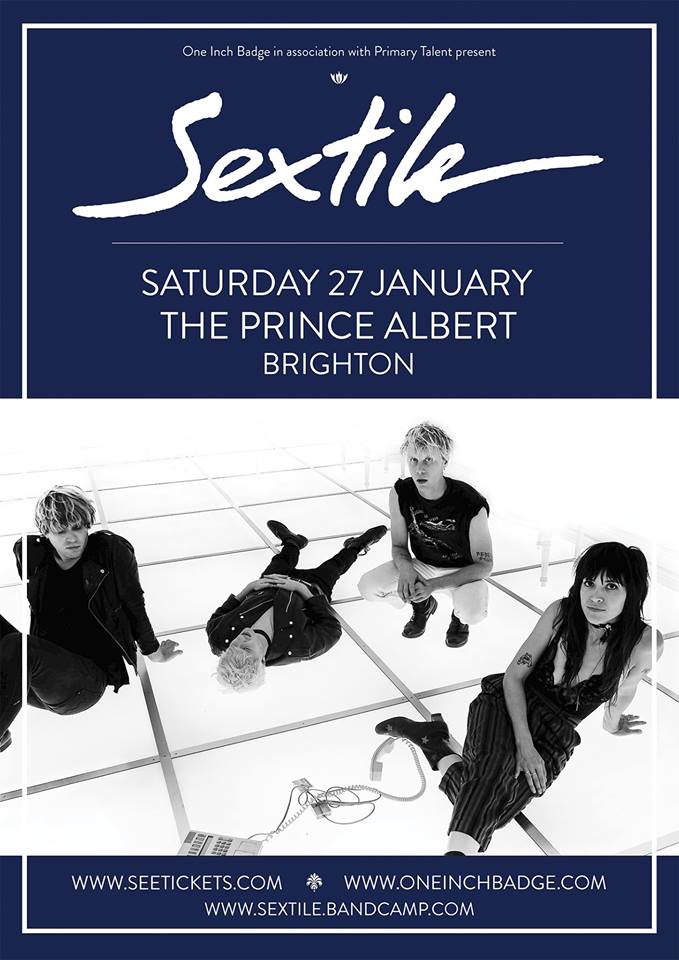 If you enjoy synth music like the Sextile, then the chances are that you will also enjoy the bands listed below. Simply click on each of the names and they will take you to our concert reviews on those bands:

War Horse impresses with a fine pedigree and a moving tale