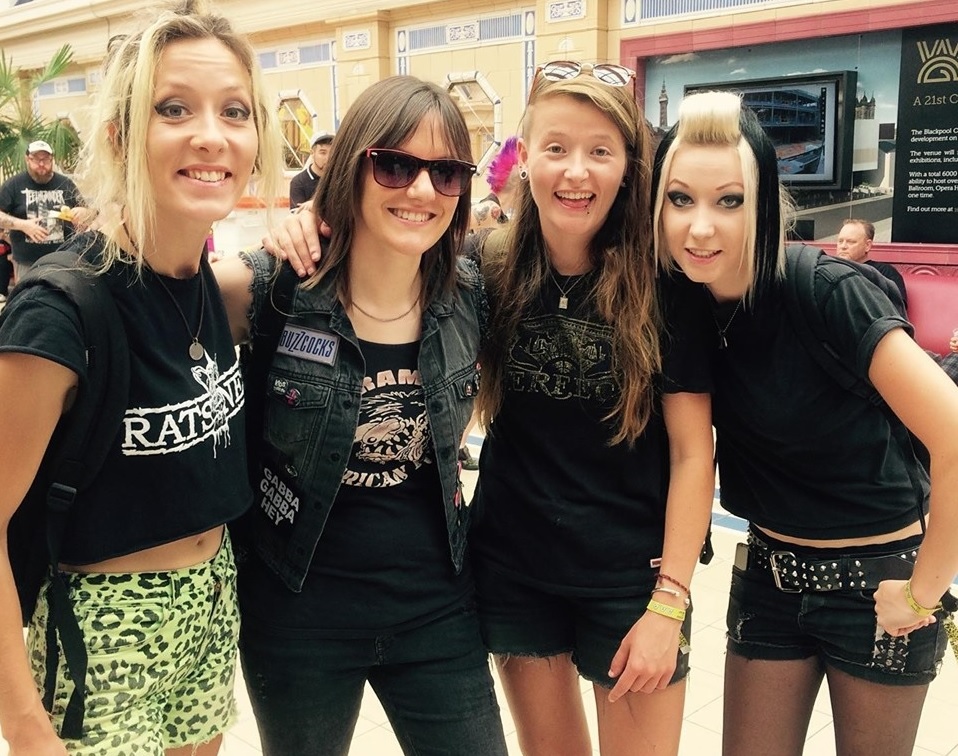 Vicky (sunglasses) from Cockwomble & The Ramonas meets Abby, Anna & Alison of Maid Of Ace at Rebellion

Del Strangefish and Jimmy Skurvi of Rebellion Radio are reporting on the events from The Rebellion Festival for the Brighton & Hove News. 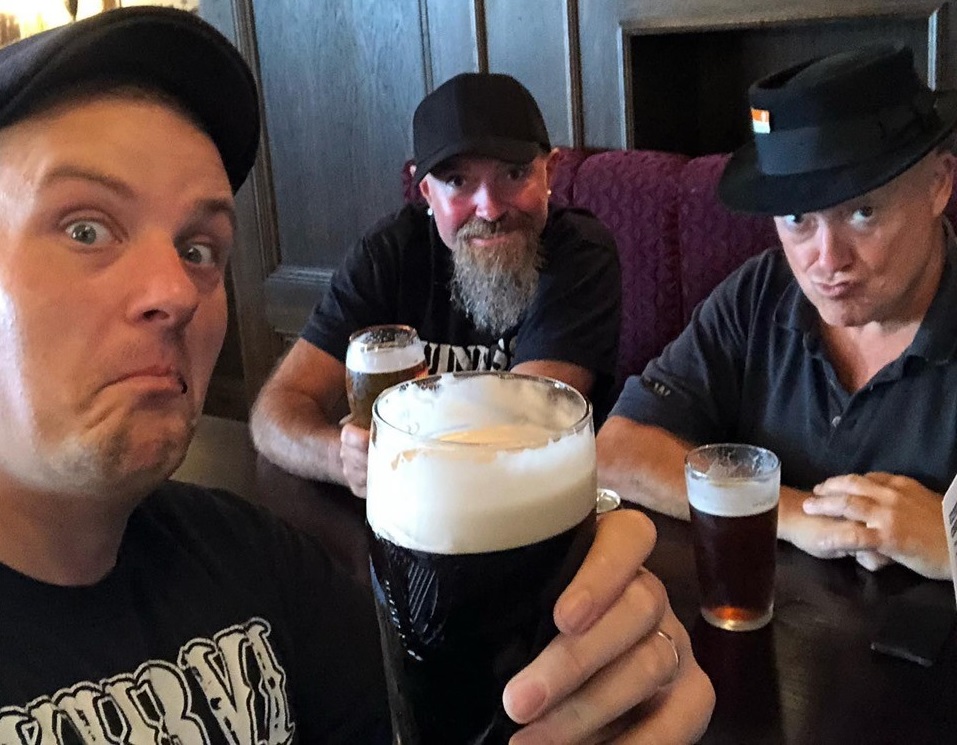 9am board meeting at Rebellion Radio with Jimmy, Warren and his brother Del

Here is a transcription of their highlights of Day 3 – Saturday 3rd August:

Jimmy Skurvi: I’ve got a funny story about Pascal Briggs. He played on the ‘Opera House’ stage and he came down and said “I left my bass guitar here at the side of the stage and now it’s not here”. He was desperate and went on stage and he had to borrow someone else’s bass guitar. I ran around, I was ringing all of the bands that had been on the stage to see if they had taken it. Couldn’t find it. We were searching everywhere, under pianos, everything. Turns out he had left it in the case in front of the drum riser right next to him! (Laughs).

DS: ‘Hugs’ also recommended and said that Booze & Glory (9:15pm – 9:55pm ‘Almost Acoustic’ stage) was packed and really good and had the whole crowd singing along. Steve Cube who does the Rebellion Information Point and is also a DJ, turned up to do his DJing last night and there were no decks! They thought that he was going to bring his own and he never ordered any. (Laughs).

JS: He brought all his records down from Bristol on the train and there’s no decks here!

DS: He said he got free drinks all night so it was OK. He said he liked Pollypikpocketz (8:00pm – 8:30pm ‘Rebellion Introducing’ stage) and also Last Tree Squad (2:15pm – 2:55 ‘Club Casbah’ stage) who were a sort of dub reggae dancehall mix. Ross from GBH helps run the ‘Empress Ballroom’ said that the singer (Enrico) of Los Fastidios (1:35pm – 2:15pm ‘Empress Ballroom’) sang two songs to his girlfriend and then got down on one knee and proposed on stage.

DS: I told that to Walnut and he (jokingly) said that he would rather get divorced on stage!

JS: If I was married to Walnut, I rather be divorced!

DS: A great story …there’s a quote from Clara from The Pukes (Thursday 3:25pm – 4:10pm ‘Opera House’ stage) who told me about this story, that Fat Bob from Hardskin (7:00pm – 7:40pm ‘Pavilion’ stage) was playing and he fell face down off the stage with his bass still on – face first into the pit, and Ben the guitarist reaction was priceless, no sympathy whatsoever, he said “What the f**k you doin’ down there mate?”.

DS: …As the whole crowd held their breath. He was down there for about five minutes apparently, and then the security carried him around to the side of the stage back up the steps and on …..and his bass was still in tune! 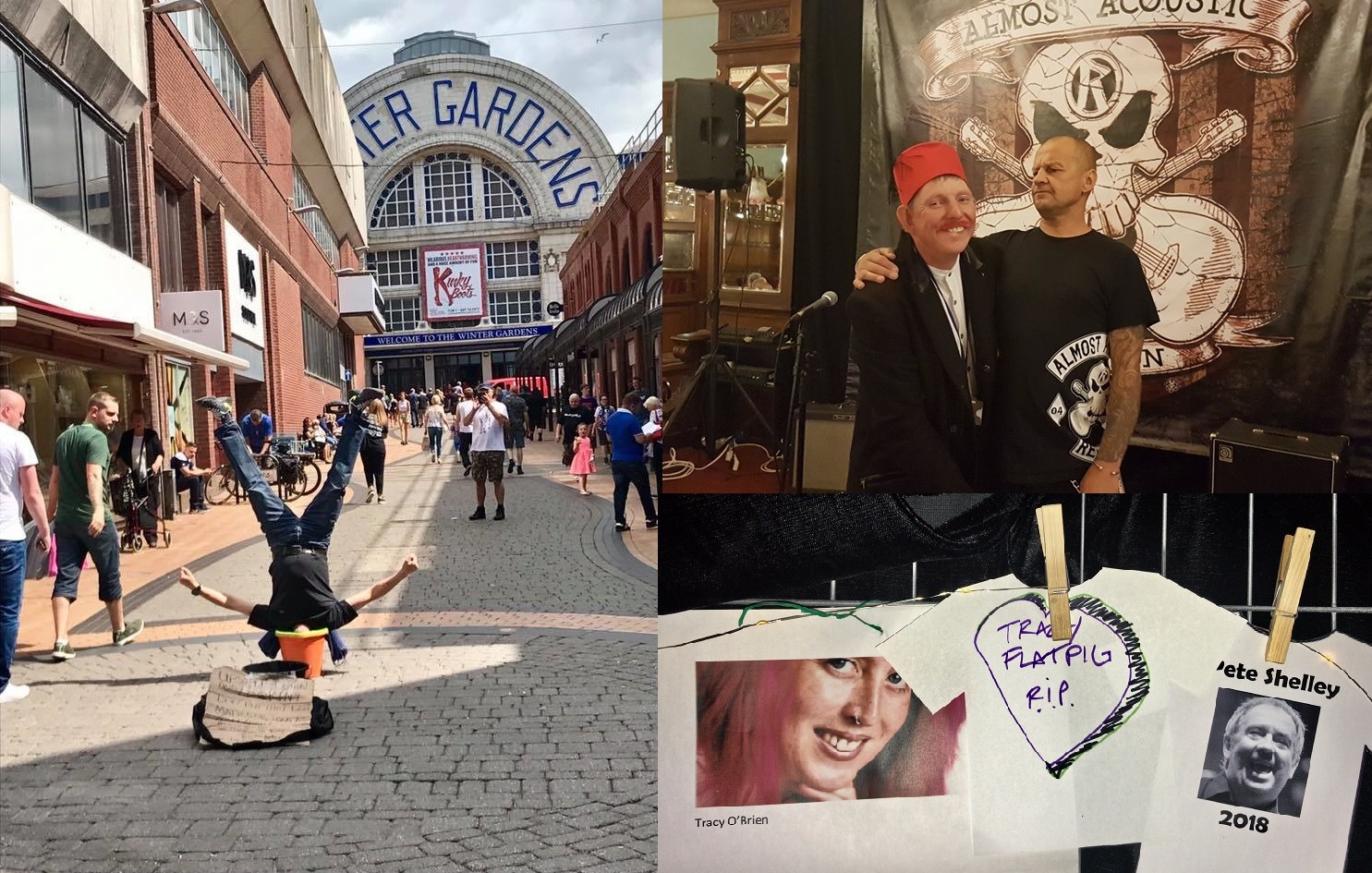 (Left) Man with his head in a bucket, spotted on the way to ‘the office’. (Top right) Huggy ‘Almost Acoustic’ Stage Manager with pal. (Bottom right) Part of the ‘Rebellion Remembers Memorial’ for those who have fallen (over) including Peter & The Test Tube Babies Driver/Merchandiser/Carer, Tracy who tolerated them for years – they used to call her Mother Theracy.

DS: Recommendations! Best band of the festival so far from Buz of Punker Bunker and from Steve Straughan from UK Subs (Friday 9:30pm – 10:30pm ‘Empress Ballroom’) is Giuda (5:50pm – 6:40pm ‘Empress Ballroom’ stage). A couple of my French friends Bruno Mondo and So Sage are over from Rennes, they own a really famous club ‘Mondo Bizarro’. It’s been going for years and years and everybody’s played there.

JS: Yeah i t was. It was amazing though. I do love a bit of Cock Sparrer. They had the whole place going as they would do – absolutely brilliant, I really enjoyed them. They had a band on after Cock Sparrer called Motorheadache (12:30am – 1:30am ‘Empress Ballroom’ stage) and they were a Motörhead tribute band. And I was at the side of the stage watching Cock Sparrer and out of the corner of my eye, like walking in the shadows was ‘Lemmy’ and I thought ‘oohh’ and I didn’t realise that this band were on afterwards.

DS: The ghost of Lemmy.

JS: The ghost of Lemmy wandering around backstage, swigging Jack Daniels and smoking Marlboro’s. Umm they were really good. I really enjoyed Walter Lure’s ‘L.A.M.F’ (featuring Mick Rossi, Mark Laff & Nigel Mead) (10:00pm – 11:00pm ‘Opera House’ stage) – It’s The Heartbreakers – one of the guys from The Heartbreakers. One of the guys who’s heart hasn’t been broken.

DS: The ghost of Johnny Thunders!

Rebellion is such a fantastic festival where everyone from all corners of the globe come together. There’s people that come all the way from Australia and Japan every year to watch bands. Some of the crew come all the way from Australia just to work here each year. You spend two days saying hello to everyone and you have to start saying goodbye because you might not see them again.

Listen to Del and Jimmy’s Day 3 broadcast in full HERE. 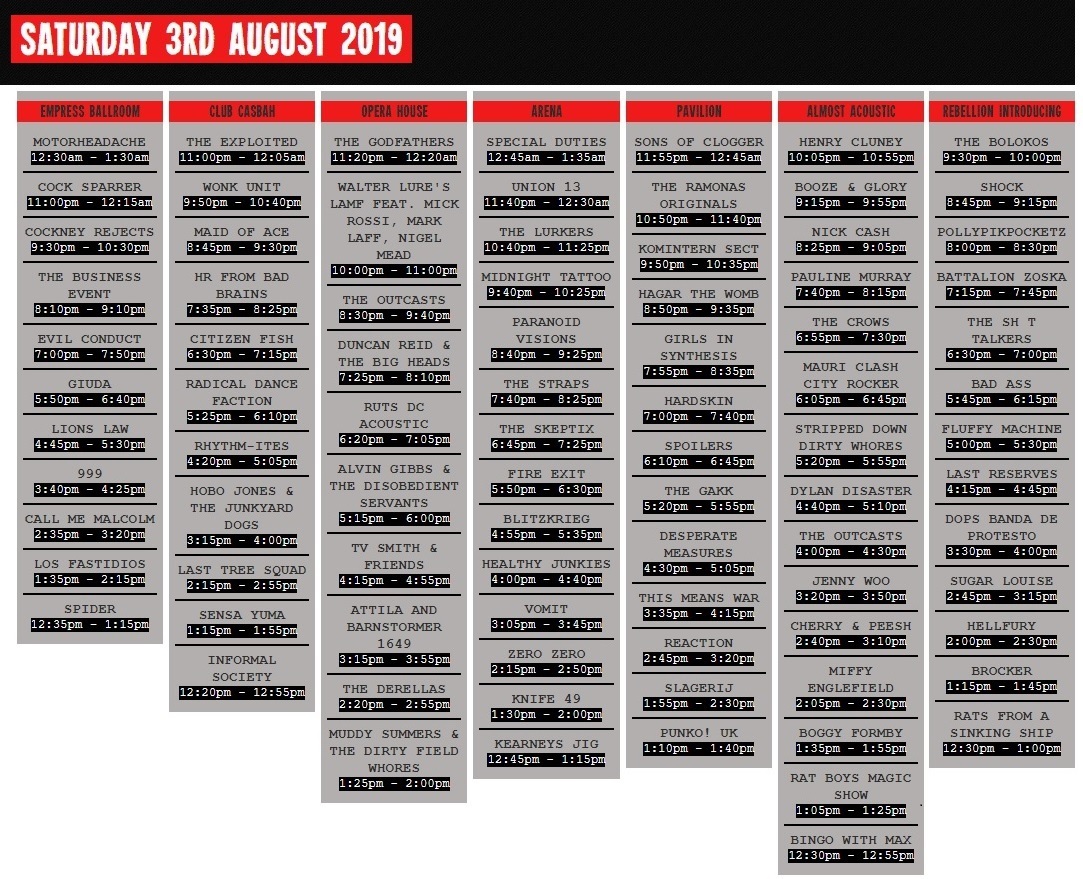