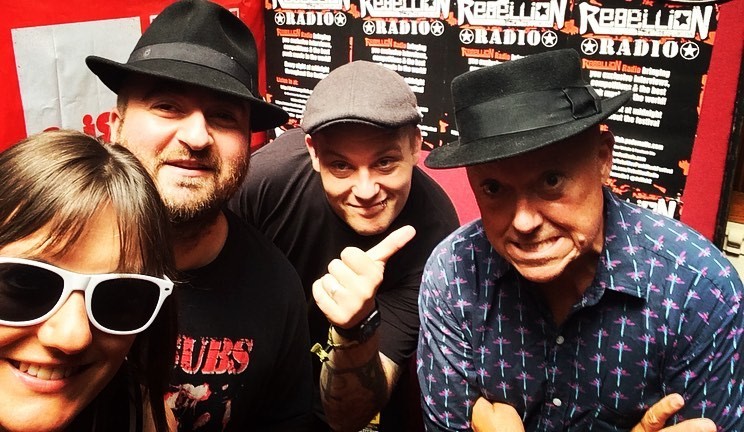 This year Del Strangefish and Jimmy Skurvi are reporting on the events from the Rebellion Festival for the Brighton & Hove News.

The Rebellion Festival is an annual punk music event that has been running continuously in one form another since 1996. It is the biggest punk music festival in the UK and attracts the largest bands and new emerging talent on the scene up to the Winter Gardens in Blackpool where it is held. It’s so big that it even has its own radio show, Rebellion Radio which is hosted by Del Strangefish and Jimmy Skurvi.

And so without further ado, here is a transcription of their highlights of Day 2 – Friday 2nd August:

Jimmy Skurvi: It was roasting in there!

DS: I managed to catch a little bit walking past the backstage. Some German friends of mine went into see The Stranglers and it was so hot and so rammed that they went off to see Infa Riot (11:55pm – 12:45am ‘Arena’ stage).

I managed to watch a bit of the Angelic Upstarts (10:50pm – 11:50pm ‘Club Casbah’) from the best place in Blackpool, which is out on the street with a nice cool breeze through the Fire Exit doors that were open. They had to open them as it was so hot. So I watched a couple of songs of the Angelic Upstarts. So that’s all that I saw really.

The big story yesterday was obviously The Pukes (Thursday 3:25pm – 4:10pm ‘Opera House’ stage) and no audience. The big story today is that there was a bit of a blunder with the listings. The Menstrual Cramps (7:20pm – 8:00pm ‘Pavilion’ stage) were on before B-Squadron (8:15pm – 9:00pm ‘Pavilion’ stage) and B-Squadron were on and they are a bit footbally – in fact I remember Nick coming upstairs and saying “They are a bit footbally, kids on the street fighting,” you know that sort of Oi OI sort of aggressive music and The Menstrual Cramps are an all-girl band who are right-on feminists, and apparently they were slagging off B-Squadron for what they were, and then a couple of the B-Squadron came and threw pints of cider over them….

DS: and the sound monitor engineer had just ordered his lunch and he was about to eat his pizza and a load of cider came all over his pizza….

DS: …and his pizza’s dropped in half and his monitor desk had cider all over it….

DS: …so the singer of The Menstrual Cramps (Emilia Elfrida) was giving them a bit of – I don’t know the full story…..

JS: So the main bulk of that story is that someone’s pizza got ruined?

DS: Yeah, by a political spat.

JS: A political spat, but it’s the food we care about 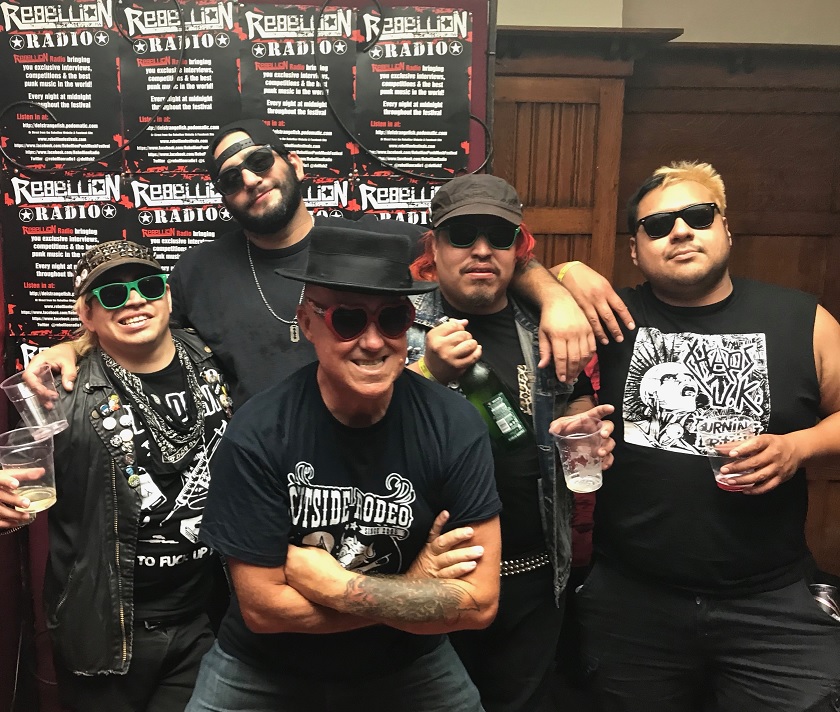 DS: …so I said you should have a sign ‘Please Crowd Surf’

DS: He said also good was Wayne from Slaughter & The Dogs Wayne Barrett & Friends (7:40pm – 8:25pm ‘Almost Acoustic’) was pretty good. He came on and he was joined by various special guests. I asked Huggy who were the special guests and he said “I don’t know, a bunch of old rockers with funny shoes”

‘Little Mark’ (Holden) a famous Brighton character had to get his programme out as he couldn’t remember what he had seen….

JS: Yeah fair enough, good!. I agree with passing Welsh rugby fan No.1, the return of Argy Bargy. They’ve not gigged much for a couple of years, they were absolutely fantastic on the ‘Casbah’ stage. There was quite a lot of good stuff on the ‘Casbah’ stage yesterday. Rust (4:10pm – 4:50pm ‘Club Casbah’ stage) all the way from Australia, I first saw them at The (Prince) Albert – amazing band. Knock Off (2;20pm – 2:55pm ‘Club Casbah’ stage), their drummer was sporting a fantastic t-shirt while he was playing….

JS: Yeah! (Laughs). Have you not seen a picture of the Skurvi t-shirt he was wearing? Very sexy he looked! And then Sp*nk Rock & The Eruptions (7:15pm – 8:00pm ‘Club Casbah’ stage) again fantastic on the ‘Casbah’ stage. That was about it for what I managed to catch. We did have some great on at the ‘Opera House’, Interrobang‽ (4:20pm – 5:05pm ‘Opera House’) which is Dunstan from Chumbawamba, they have been here the last couple of years and were amazing, they were really good. Johnny Moped (6:30pm – 7:20pm ‘Opera House’ stage) they were fantastic as well. And erm Eddie & The N(H)ot Rods (10:00pm – 11:00pm ‘Opera House’ stage), not Eddie and not the Hot Rods, no original members! Eddie & The Hot Rods.

DS: In fact I might reform the Sex Pistols on my own.

JS: Yeah that’s it. Next year! The Beatles featuring Jimmy Skurvi at the ‘Opera House’.

JS: That was an idea I had yesterday.

Listen to Del and Jimmy’s Day 2 broadcast in full HERE. 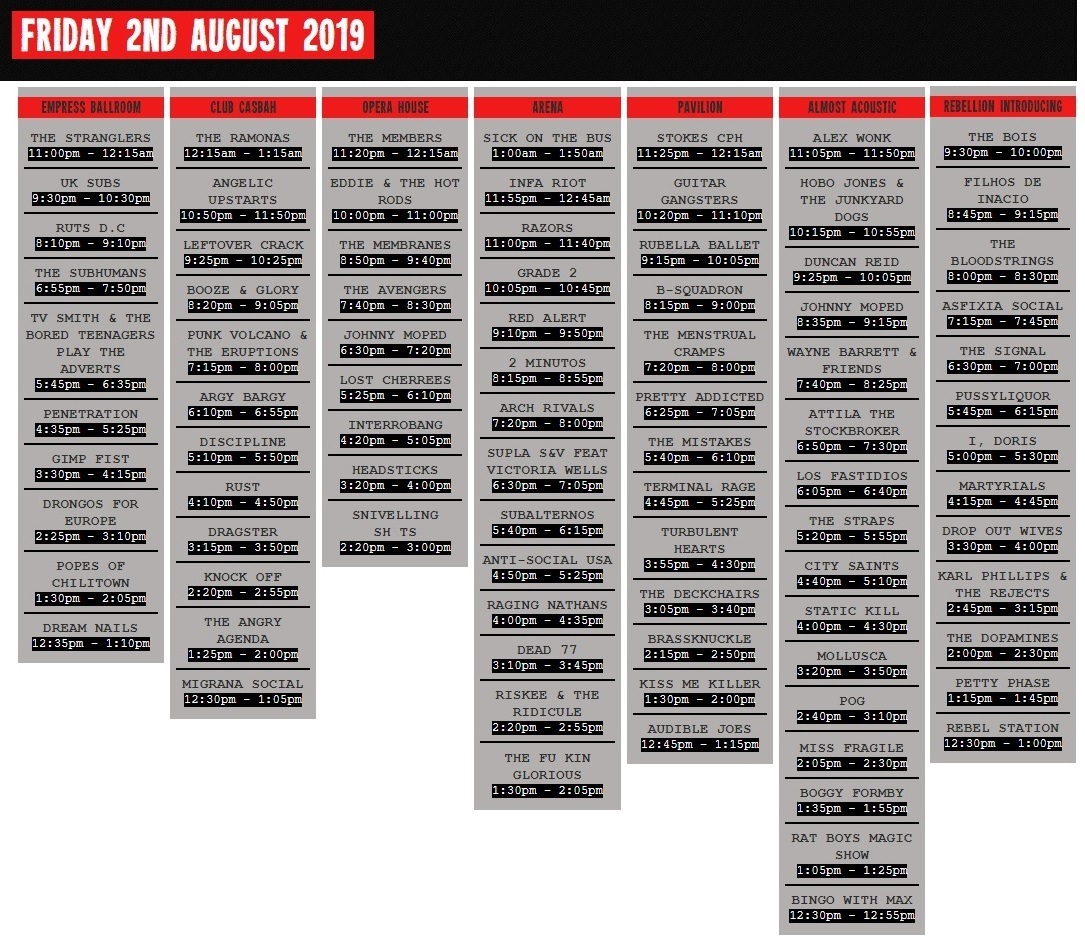