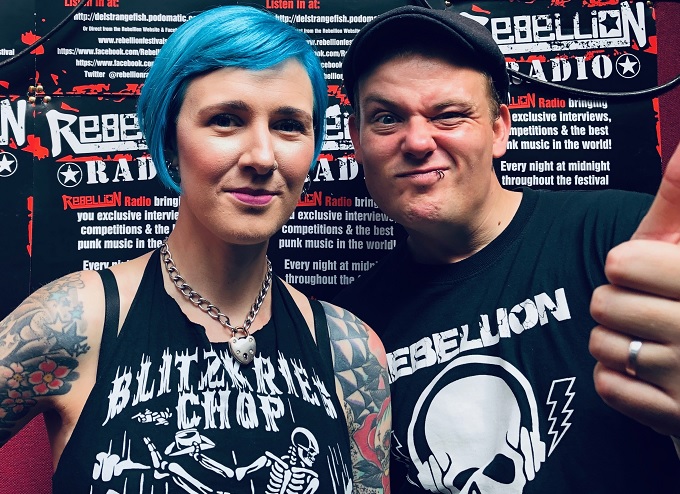 The Rebellion Festival is an annual punk music event that has been running continuously in one form another since 1996. It is the biggest punk music festival in the UK and attracts the largest bands and new emerging talent on the scene up to the Winter Gardens in Blackpool where it is held. It’s so big that it even has its own radio show, Rebellion Radio during the event, which this year is running from Thursday 1st to Sunday 4th August.

The Rebellion Radio show is hosted by our local lads Del Strangefish (Peter And The Test Tube Babies) and Jimmy Skurvi (Skurvi) who also broadcast ‘The Delstrangefish Show’ on Brighton’s Radio Reverb.

Every evening during the Rebellion Festival at around midnight there will be a podcast with the highlights of each day including music, interviews with bands and fans, news, any line up changes, general information, drinking and various other punk rock shenanigans.

The daily podcast will be available as a Podcast here…. www.delstrangefish.podomatic.com

You can download the podomatic app to your phone or listen to it on your laptop in your B&B, hotel or residence and of course it is available to people all around the world who have been to Rebellion before and can’t make it this year. Even punk music fans who have never been, can soak up the atmosphere via the airwaves. 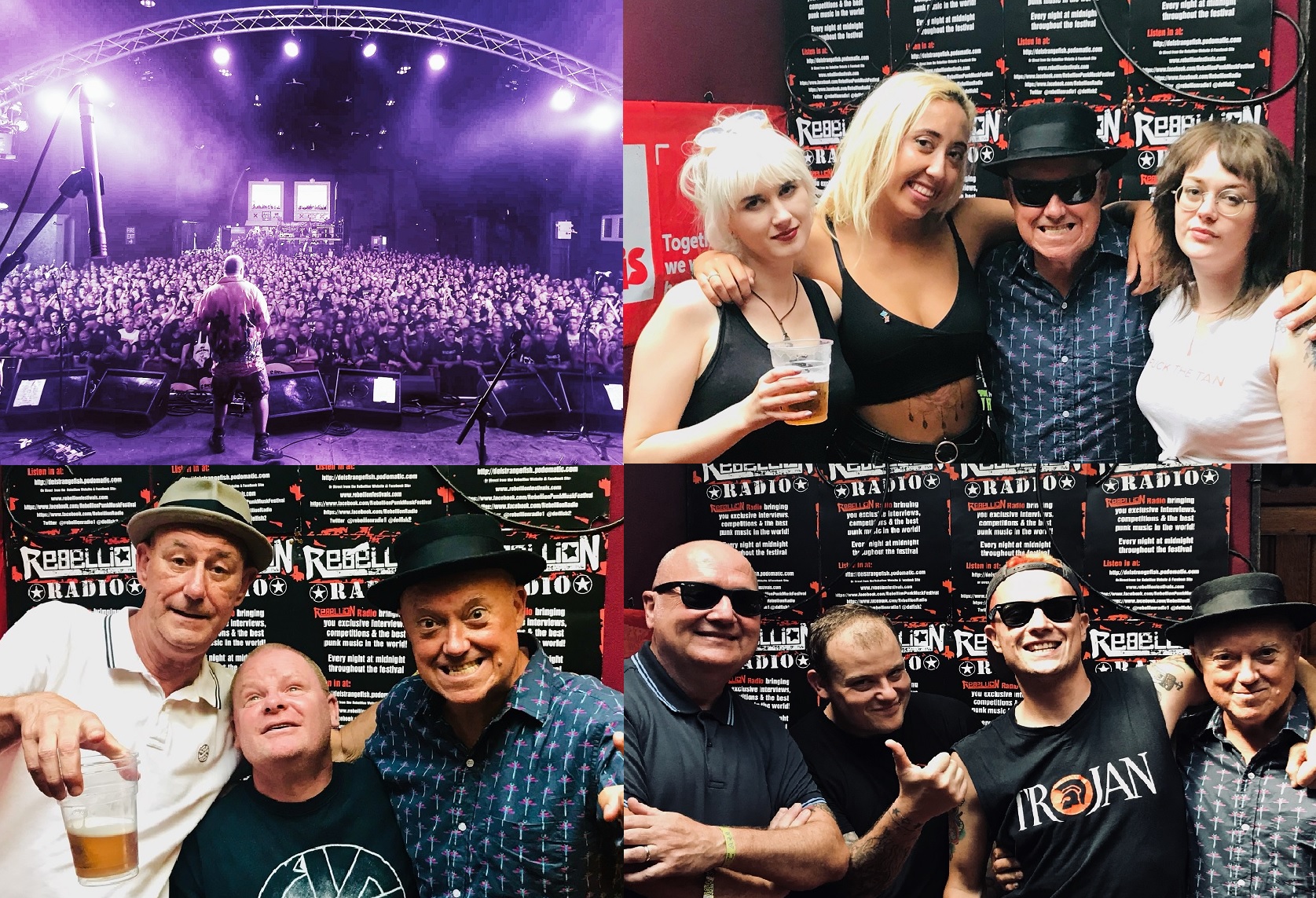 Del Strangefish and Jimmy Skurvi are also reporting on the events from Rebellion for the Brighton & Hove News. And so without further ado, here is a transcription of their highlights of Day 1 – Thursday 1st August:

Del Strangefish: I haven’t managed to see many bands other than my own band (Peter And The Test Tube Babies) that were on earlier on (8:20pm -9:10pm on the ‘Club Casbah’ stage)

Jimmy Skurvi: And that’s nothing to talk about!

JS: …Which is what Rebellion is all about. It’s about passing the torch with old and young.

DS: Also on the ‘Almost Acoustic’ stage Emily Flea (2:10pm – 2:35pm ‘Almost Acoustic’ stage) slagged off Peter And The Test Tube Babies (8:20pm – 9:10pm ‘Club Casbah’ stage). Anti-Nowhere League said as old punk band f**k ‘em. We don’t know why? Maybe because our lyrics were a bit close to the bone in the day. It’s quite brave what Huggy said because she had the guts to slag off everyone’s favourite bands in front of them all.

JS: OI! Oi! Oi! When have the Test Tubes ever been anyone’s favourite band?

DS: Walnut stage manages the ‘Pavilion’ and he’s really looking forward to The Ramonas originals (Saturday 10:50pm – 11:40pm ‘Pavilion’ stage), that’s his favourite. A funny story happened on Jimmy’s stage, he’s going to tell you about his stage in a minute. The Pukes (first act on the ‘Opera House’ stage at 3:25pm – 4:10pm) went on with their Ukuleles ready to rock the house and there wasn’t one person in the audience! And they were like Hmmm I’m sure we’ve got at least one fan, and they were about to start playing and they realised that security hadn’t opened the doors, so they had to go off the stage, get the audience in which was quite big in the end…

JS: There was an absolutely massive queue outside the Opera House waiting to go in to see The Pukes. I wandered out, oh why isn’t there no-one here, walked out to see this massive queue. Then that’s when we worked out that the doors hadn’t been opened.

DS: Then when we were downstairs in Jimmy’s crew room, we were worried that they were going off 10 minutes early. Instead of there being no audience and a band, there (will) be an audience and no band!

JS: TV Smith was on at the Opera House and was absolutely fantastic – they blew it away. To be honest it was the book ends of the Opera House that were the best things. The Pukes (3:25pm – 4:10pm ‘Opera House’ stage) when they started were absolutely fantastic, (they) really got the stage going. And Spear Of Destiny (11:30pm – 12:30am ‘Opera House’ stage) closed the stage. Now it’s in the Opera House, which is slightly different to all the other stages. It’s a big boombastic old theatre stage, and Spear Of Destiny are one of those bands that can really fill it. They’re not a standard punk band that just need a load of people bouncing down the front. Kirk Brandon (Spear Of Destiny’s frontman) really has that sound in his voice when he fills the theatre, and they were absolutely amazing. Yeah, Spear Of Destiny would be one of my highlights.

DS: Al, he’s the Production Manager for the whole festival, he recommended The Blunders (6:30pm – 7:10pm ‘Arena’ stage). But I’ve never heard of them. Have you heard of The Blunders Jim?

JS: No. I also recommend ‘The Red Stripes…that’s a lager.

Listen to Del and Jimmy’s Day 1 broadcast in full HERE. 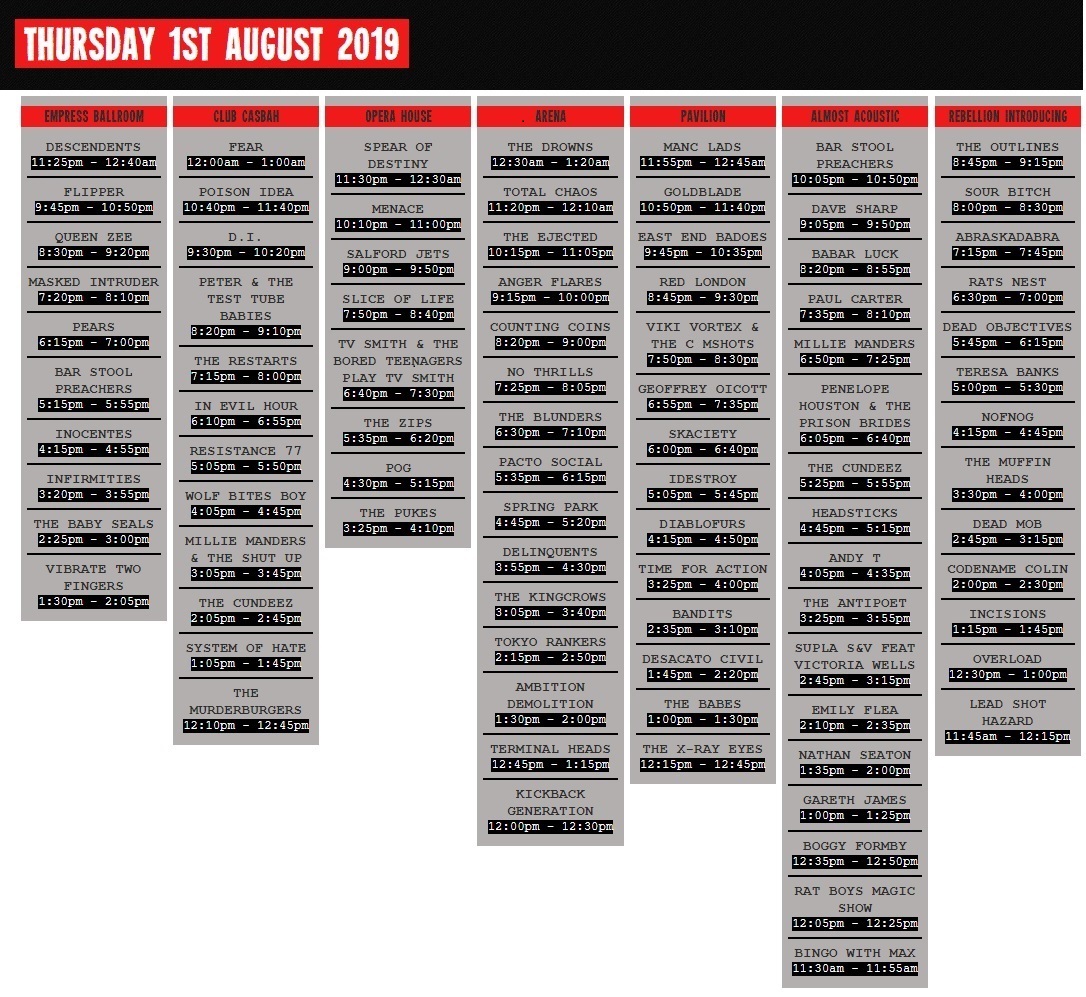