Tallies (on the way) up 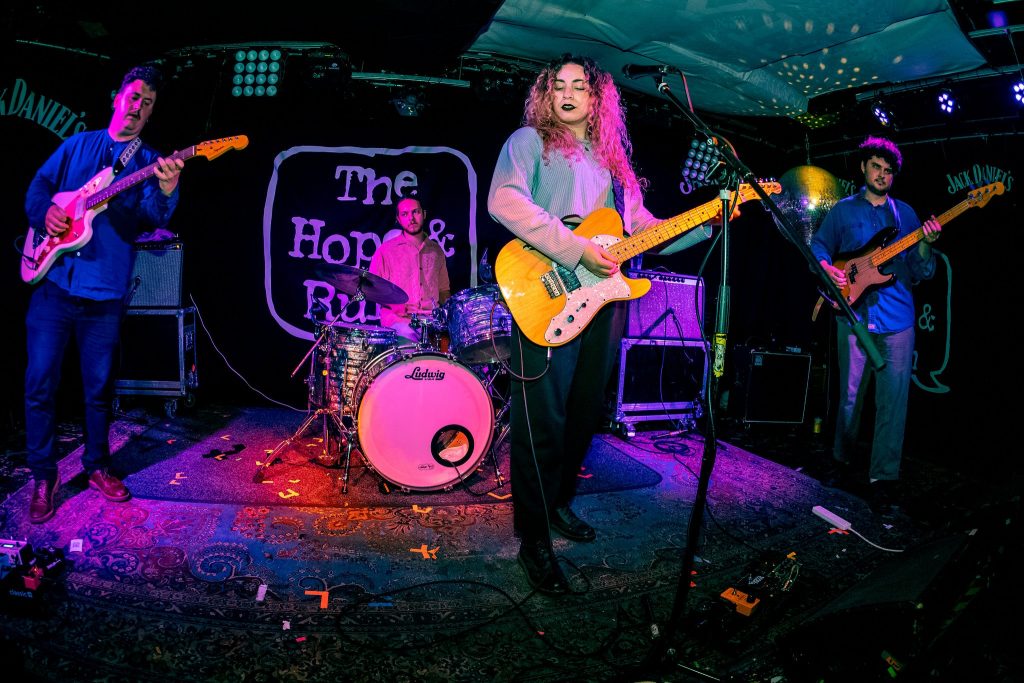 The weather in Brighton had been glorious all day and there was a relaxed atmosphere in town and especially up at the Hope & Ruin on Queens Road, where there was quite a buzz going down.

On the bill tonight were Tallies, Hanya and World News. 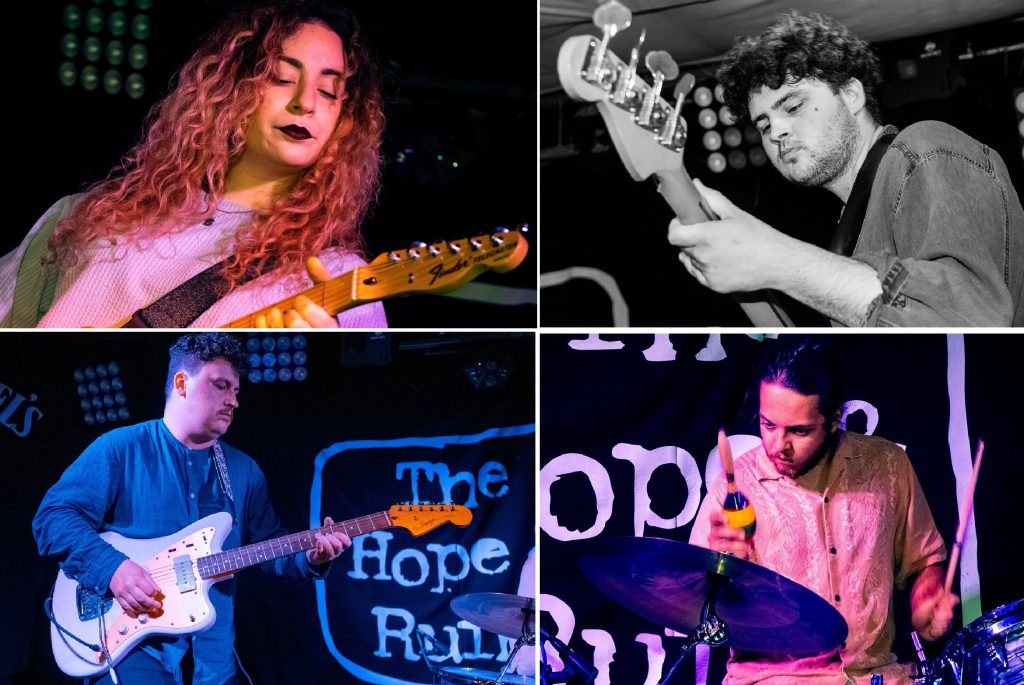 The headliners, Tallies, are based in Toronto, Canada and were closing their seven date UK tour here in Brighton. They have performed here once before when they took part in The Great Escape new music festival and appeared at The Walrus and another venue in town.

Tallies are Sarah Cogan (vocals/guitar), Dylan Frankland (guitar), Cian O’Neill (drums) and either Stephen Pitman or Patrick McCormack (bass), as their Facebook page lists both names as bassists. They are touring in support of their debut self-titled album, which you can purchase HERE.

The Tallies recorded sound and indeed here live tonight is just the music that you need in order to finish off such a lovely day. It’s breezy summer music that can be enjoyed equally on the beach or at a picnic. It blends elements of shoegaze, dream-pop, and surf rock into a fresh sound that’s all their own.

The band was founded by singer and rhythm guitarist Sarah Cogan and lead guitarist Dylan Frankland, a couple who met in a sound engineering class while attending Algonquin College. Tallies’ sound was fully realized with the addition of Dylan’s friend from childhood rock camp, drummer Cian O’Neill, and bassist Stephen Pitman. In a year since relocating to Toronto, the quartet have played shows with bands like Mudhoney, Hatchie, Sloan, and fellow Toronto band Weaves.

Dylan’s music obsessed fathers influence on him has certainly paid off as he had immersed his son in music for most of his life, with greats like The Smiths, The Sundays, Aztec Camera, and Cocteau Twins, all of which can be heard in the Tallies sound. In fact whilst I was watching their set, I made comparison notes and spotted all of the above bar Aztec Camera, but I would add that Sarah’s melodic sweet country style tinged vocals are similar to Rachel Sweet’s and there’s a slice of The Cardigans and a little Blondie sound in there too, as well as a fraction of Jo Boxers drumming and twangy guitar sound of The Shadows.

Tonight, the band simply went from one melodic indie dream pop/jangly surf guitar number to the next without any fuss. Sarah who was sporting strikingly dark lipstick, was running the show, whilst Dylan’s guitar sounded terrific and Cian was notably playing drums in his socks and even played one track with just one drumstick and one maraca – not witnessed that before!

Their whole set, bar the opener, was of songs from the debut album and as I loved the tunes so much, I decided to buy their CD on exit. However, I shouldn’t have spoken to the band first, as by the time I got to their merch stand outside the door, all of the CD’s had been sold! I would most certainly love to see these guys play live again as there wasn’t a bad tune played all night! 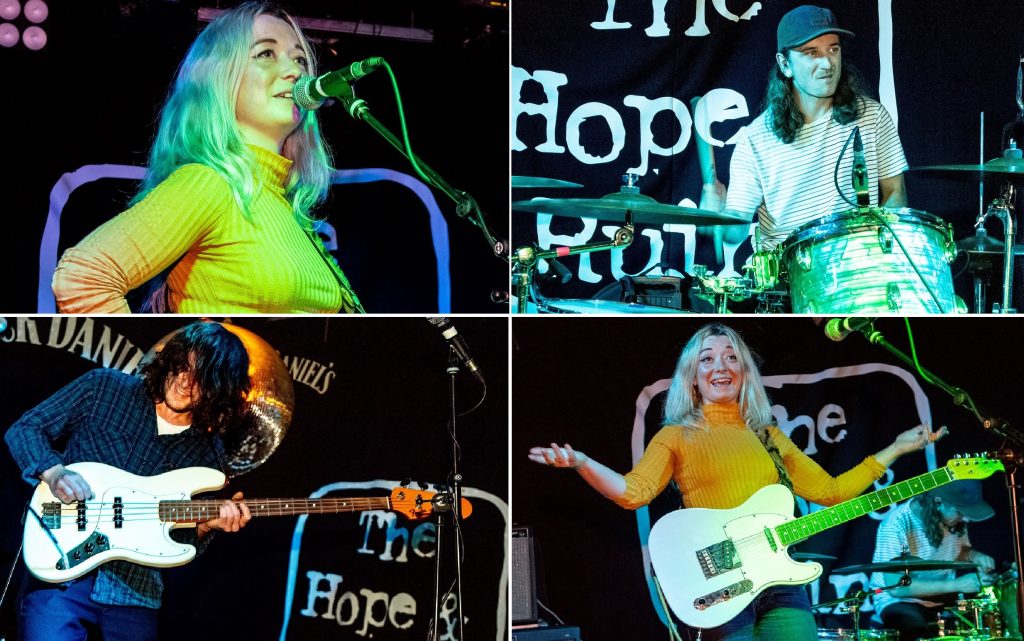 Hanya was originally a bedroom project formed by Heather and Jack which was conceived above LazerZone in Brighton, and now has expanded to become a firmly forged trio who are proudly creating their own brand of fiery shoegaze combined with a psychedelic 70’s sense.

We knew what to expect from the band as we have previously seen them perform live in Brighton, of note being their performance at The Rialto last November, which was in support of their debut 5-track EP entitled ‘I Used To Love You, Now I Don’t’ on Bristol’s Leisure Records on Friday 23rd November. Read that review HERE.

As I was watching Hanya’s set, one tends to get all comfortable and relaxed with their sound and then all of a sudden….bang….Heather’s vocals suddenly switches from a honey sound and then she suddenly hits the power button within a second and we are served a true gritty sound. Boy she can sure belt out the notes when she wants to, with often weaving extra layers and emotion into the band’s sound, which certainly makes you yearn for more tracks.

This evening, I particularly enjoyed Heather’s echoey U2 style guitar work, combined with her Patti Smith infused delivery and the fact that one of the tunes wandered into The Cure’s ‘A Forest’ territory. Jack had been giving his kit some welly and temporarily broke his drum pedal, which gave Heather the cue to tell a ‘rubbish’ joke. I’m not being unkind, it was a joke about rubbish. Maybe next time she can use the one that goes …“I was at a gig the other night and the guitarist said he was going to hit me with the arm of his guitar! Is that a fret?” – boom boom! The evening was kicked off by the Godlike towering figures of Alex Evans and his older brother Rory Evans and their mate Malte Henning, who collectively are known as World News.

The trio are based in Brighton and tonight certainly have brought along quite a few friends judging how full the venue is right from the start of their set. Despite only been going for around a year, they appear to be rather proficient with their instruments already, with Malte plugging away at the drumset, whilst, Rory slaps the bass and Alex delivers the charm and vocals whilst playing guitar. As with every band, there’s always things to learn as you go along and World News could possibly fine tune their instruments a tad quicker in between numbers, but I guess that striving for perfection is the name of the game in this business. It’s all a learning curve, such as not to place your full beer on top of your vibrating bass speaker as the sound will bounce the glass off and onto the stage – not mentioning any names.

They have already performed at The Great Escape new music festival and I expect them to turn up again for TGE2020 and get the audiences toes tapping to their indie rock sound just like they did for the very enthusiastic crowd tonight.

Of their set, I was particularly drawn to ‘Give It Time’ which will soon see the light of day and in parts can be compared to Orange Juice and The Smiths, and best track was ‘I Don’t Like Your Perfume’ which really has a Stooges vibe going on.

The guys released their debut single ‘Wake Up’ in July and you can find it on Spotify HERE. See the guys live next in town at The Richmond with Swoon and Thumper – now that’s a gig not to be missed – details HERE.