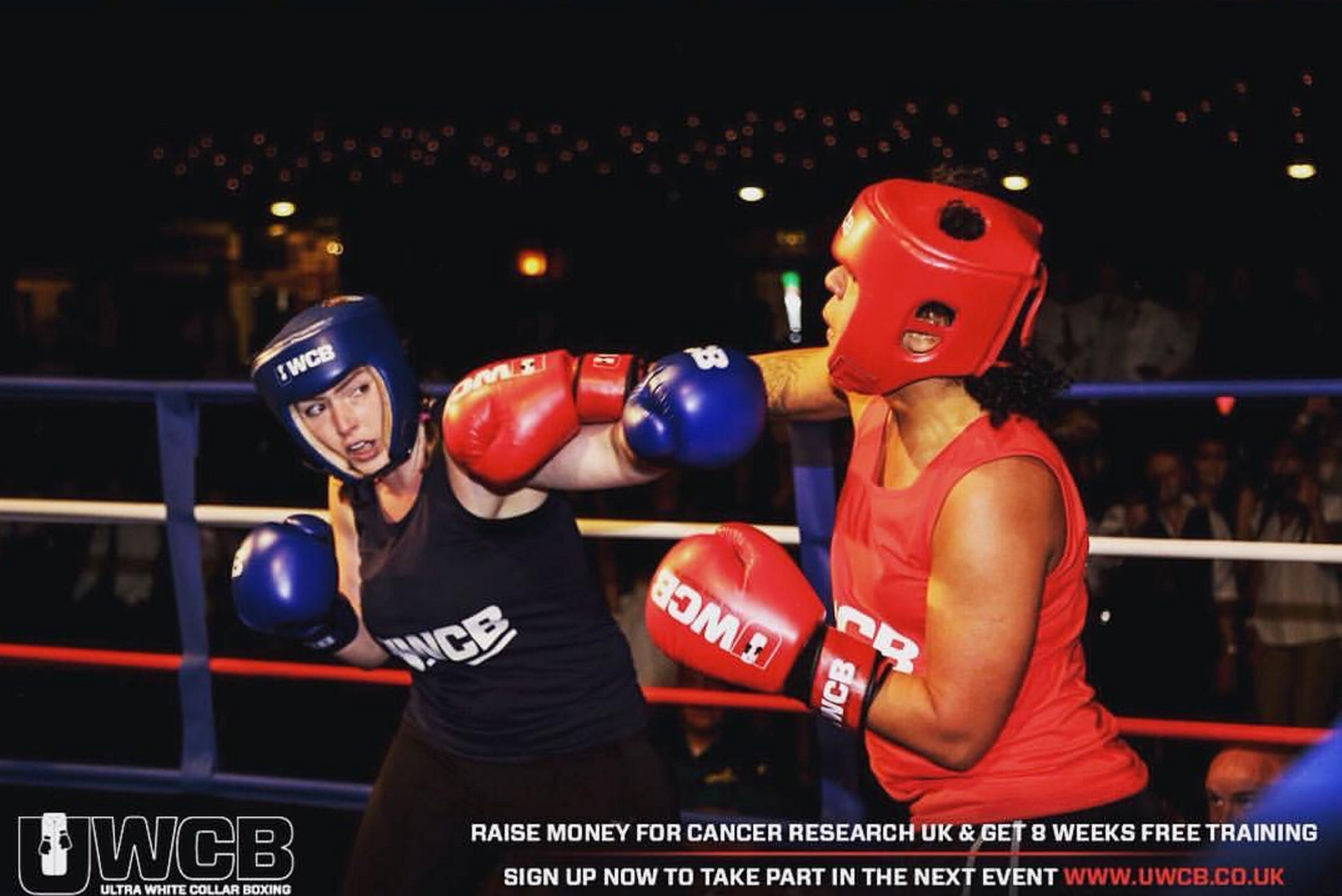 Pictured: Aimee Edwards (in blue) participating in an Ultra event.

Hove NHS worker took part in a charity boxing event to get herself into shape and fell so in love with the sport she now trains others and fights in semi-professional bouts across the UK.

After taking part in the event for aspiring boxers, Aimee Edwards, became ‘hooked on the buzz’ that being in the ring gave her and wanted to help others experience it too.

Now, the 32 year old’s commitment has seen her nominated for a charity award by the company behind the events, Ultra White Collar Boxing.

Ultra White Collar Boxing participants are given the opportunity to take part in eight weeks of free professional training before a showcase event in front of hundreds of spectators.

Those taking part are asked to sell tickets for the show and raise at least £50 for Cancer Research UK.

So far, Ultra Events has raised a staggering £20 million for Cancer Research UK.

Miss Edwards said: “I signed up for the boxing in 2015 because I was quite overweight and got myself into a bit of a slump.

“I wanted to give back because cancer has affected my family quite a lot.

“My mum’s parents, Mary and Tom, passed away from cancer before I was born.

“My other nan, Margaret, also passed away in June from pancreatic cancer.”

Miss Edwards, who works as an information governance manager in the NHS, added: “I did my first fight at the Grand Hotel and after I won I got the buzz. I was hooked.

After a few months, her trainer asked her to help preparing the new group of Ultra competitors at Stingray Boxing gym in Brighton.

For the next upcoming Ultra event in Brighton, Miss Edwards will be leading the training, despite also having a full time job.

Each year thousands of people across the UK take part in Ultra Events to raise money for Cancer Research UK.

Whether it’s boxing, mixed martial arts, ballroom, comedy or darts, they have raised huge amounts of money despite their own personal struggles.

There have also been people who have inspired others, or gone above and beyond, to raise incredible amounts of money for Cancer Research UK and they are now being honoured in the Ultra Awards.

Miss Edwards said she was thrilled to be nominated by other participants for the ‘Outstanding Achievement award’.

She said: “I was so shocked when I got the email telling me I had been nominated.

“I just do it because I love it. I can’t put it into words how I feel.

“I want to thank everyone because I think it is important people are able to hear your gratitude.”

As well as helping train others and working full time, Miss Edwards is also fighting on December 7 in Liverpool to try and win the semi-pro middleweight title.

She said: “I have had 16 fights since I first competed in the Ultra event. I’ve only lost one and I’ve drawn three.

“Boxing really helps people with their mental health – some people come from a really dark place.

“It releases really good endorphins but it gives you a purpose and something to work towards. It gives you that time to forget everything else and just focus on the training.”

Anyone thinking of signing up for future events can visit: https://www.ultrawhitecollarboxing.co.uk/locations/brighton/

Voting for the awards closes on December 4 at 9pm. The winners will be announced on December 6.