‘Close Encounters’ with Bat For Lashes in Brighton 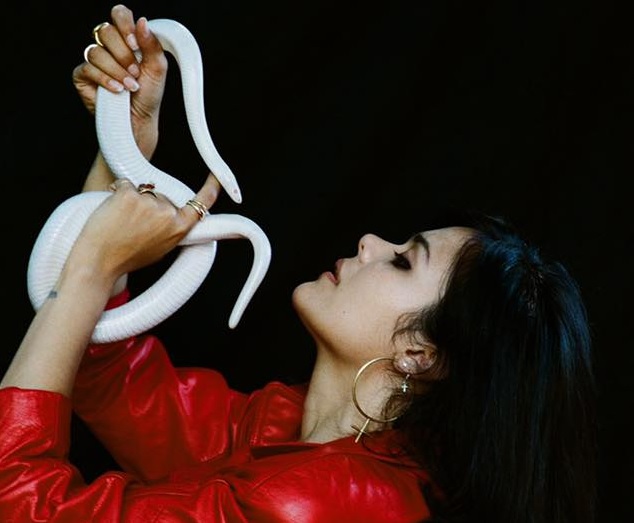 Bat For Lashes concerts are always far more than just a ‘gig’, and tonight is no exception. The setting is Brighton’s magnificent St Bartholomew’s Church, which is widely believed to be the tallest church in England (excluding spires and towers) with a height to the apex of the roof of 135 feet.

Natasha Khan (who essentially IS Bat For Lashes) arrives onstage with no fanfare, and with one accompanying musician, whose name may or not be Laura Graves (I couldn’t quite hear the introduction Natasha gave her later on). After the first song ‘Kids In The Dark’ from the current album ‘Lost Girls’, Natasha explains that tonight’s show (and indeed the whole of this tour) features a stripped-back approach. There are no beats, no bells and whistles, and apart from she who may or may not be Laura, no band. 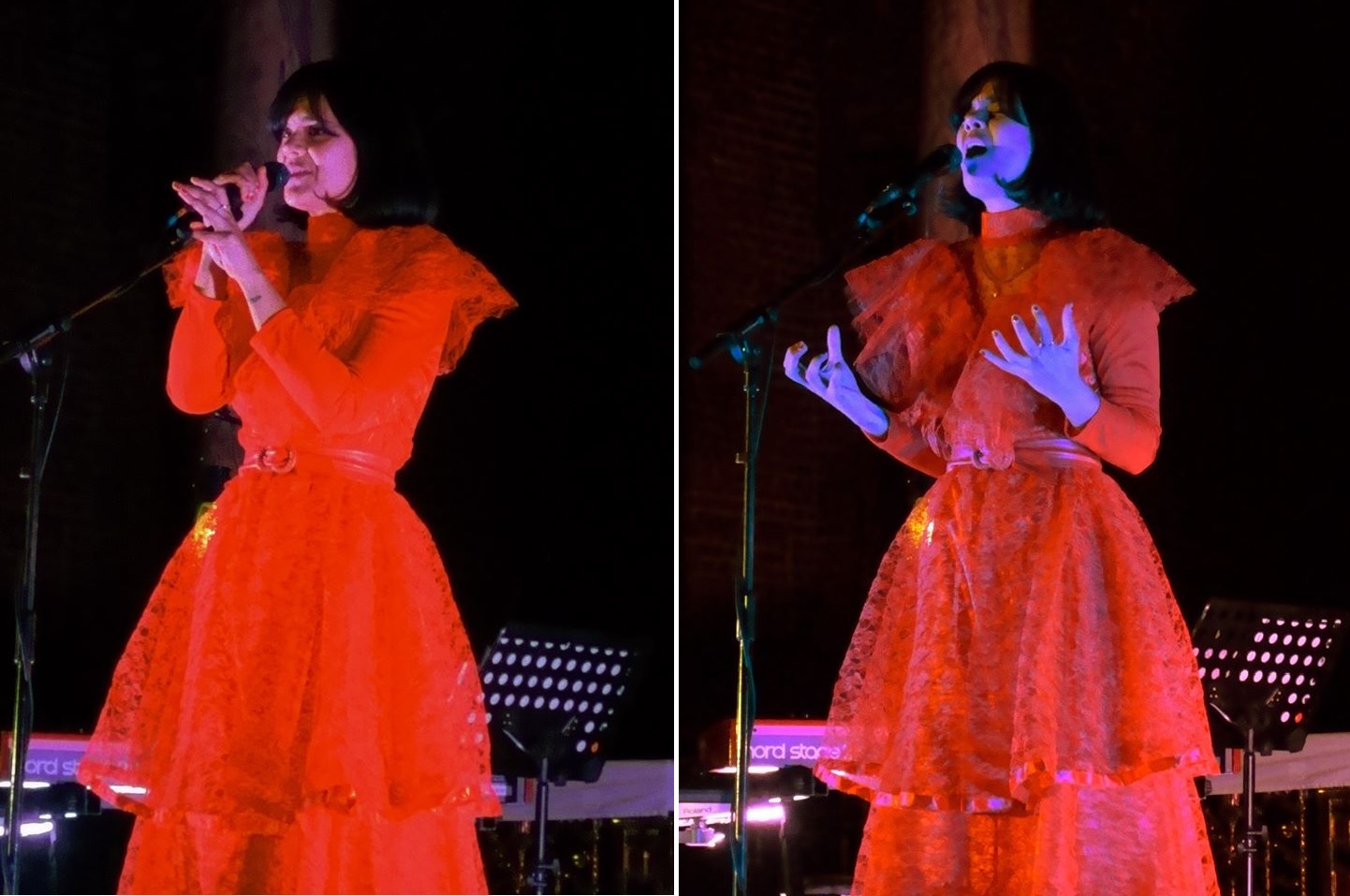 This is a very brave approach, as in the event of any mistakes there really is nowhere to hide. However, if there were any mistakes, I certainly didn’t notice them. Natasha also tells us that there will be some stories, and that she has brought some “bits and bobs” to read to us too. The net result of this is that the gig feels deliciously intimate. It’s as if you’ve visited a musician friend who plays you some of their latest songs, tells you about what lies behind the songs’ genesis, plays some covers that mean something to them, and generally chats. Suddenly the magnificent St. Bartholomew’s Church seems much smaller and cosier.

So what do we learn? The song ‘The Hunger’ from the current album is based upon the film ‘The Lost Boys’, which is one of Natasha’s favourite films. Likewise ‘Desert Man’ was inspired by a trip to Death Valley and Tacoma. ‘Feel For You’ was based upon songs that Natasha’s mum used to sing, and that the family used to dance to in their kitchen.

Natasha is clearly very creative, and much more than just a musician. She has recently been doing a script-writing course at UCLA (University of California, Los Angeles), and wrote a novella at around the time her album ‘The Bride’ came out. She reads a chapter out to us, and it is very moving.

Apparently the 12 year old Natasha used to make herself cry listening to power ballads! This revelation precedes a rather superb (and unexpected!) cover of Don Henley’s ‘Boys Of Summer’. She’s also interested in people being abducted by aliens and reads a poem about that. Fittingly this is followed by ‘Close Encounters’ from ‘The Bride’, on which Natasha plays an autoharp. There is a seam of interest in the supernatural and the unexplained that runs through Natasha’s work that gives it an appealing air of mystery.

Apart from ‘Boys Of Summer’ the bulk of tonight’s set is taken from the current Bat For Lashes album ‘Lost Girls’, apart from three songs from ‘The Bride’. It is not unnatural to expect an artist to showcase their latest work. However, tonight is different in that the songs are presented in a very different way to their recorded versions. This is an unusual and pleasingly bold approach. However, the main set does end with two oldies: a piano version of ‘Daniel’ (again very different from the recorded version) and ‘Laura’, from ‘The Haunted Man’.

Natasha leaves the stage, but not for long. She returns and tells us how nerve racking this tour has been, and thanks us for listening to her “talking crap”. Well, it sounded pretty interesting crap to me. She treats us to ‘Moon And Moon’ from the ‘Two Suns’ album, and then two very moving covers: ‘This Woman’s Work’ by Kate Bush, and ‘I Drove All Night’ by Cyndi Lauper. Natasha tells us that being introduced to the music of Kate Bush changed her life. That’s as may be, but she makes both of these songs her own.

This was a truly remarkable concert. Natasha metaphorically laid herself bare tonight. She truly communicated with her audience in a way that I don’t believe I’ve seen any other artist do before. It was as if each audience member left with a small piece of Natasha. It was a truly exquisite evening. Thank you Natasha.

For further information on Bat For Lashes visit www.batforlashes.com 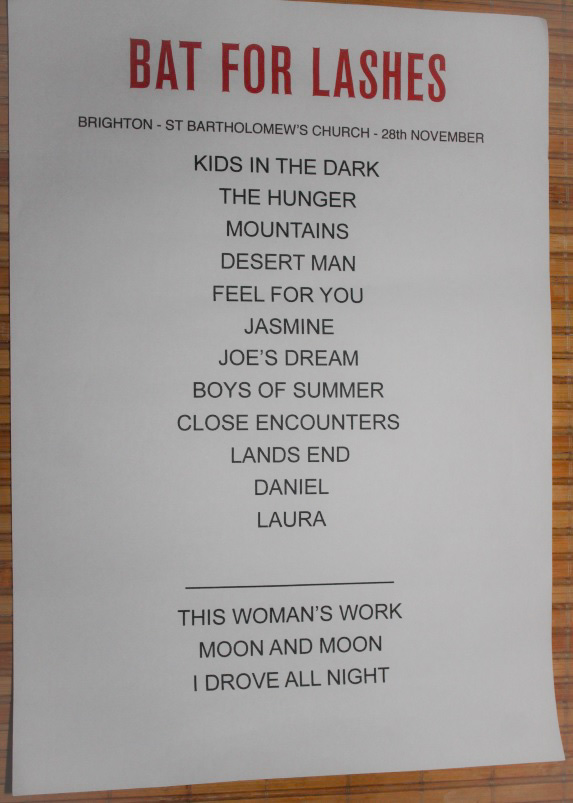 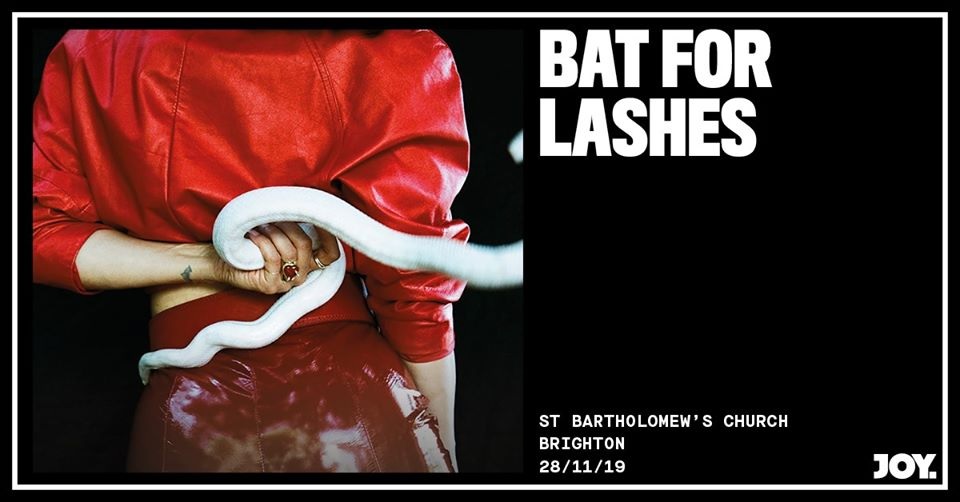 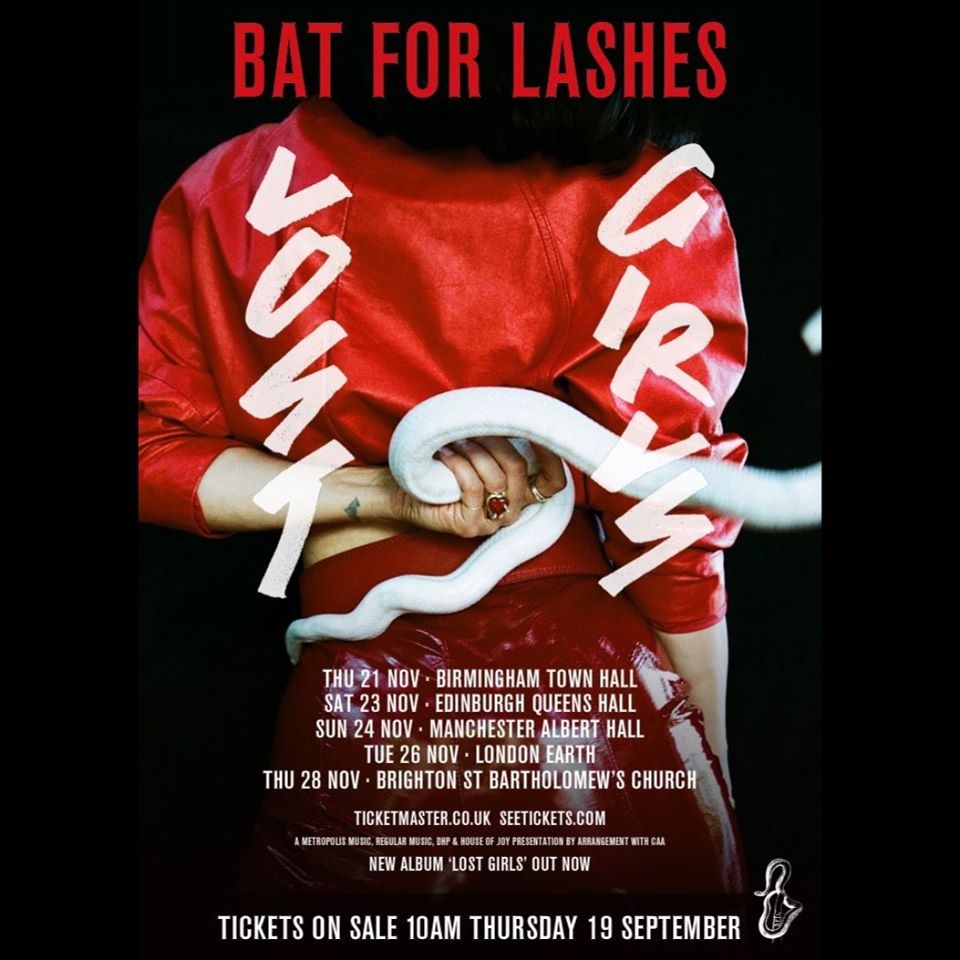