The charity Crimestoppers has offered a £5,000 reward for information leading to the arrest of a “dangerous” man wanted for questioning about threats made at knifepoint in Brighton. 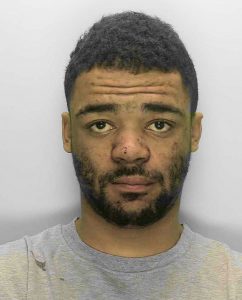 It said: “The independent charity Crimestoppers has launched an appeal for anonymous information to urgently find 23-year-old Jordan Charles, wanted for questioning over a series of violent incidents in Sussex.”

Crimestoppers said that Sussex Police wanted to question him about a string of violent offences in recent months, including robbery.

He is suspected of having threatened people with a knife in Brighton and to have hurled racist and homophobic abuse and spitting saliva and blood at police.

Crimestoppers said that Charles was suspected of “ransacking a takeaway in Crawley and attacking a customer (and) attacking staff at another Crawley restaurant with a glass and a metal chain dog lead wrapped around his hand”.

He is wanted for questioning about an attack outside a night club when a woman was punched and kicked to the floor.

And, Crimestoppers said, he is suspected of “assaulting a 12-year-old girl who had come to the aid of her mother and aunt during a parking dispute”.

He has also failed to appear in court.

The charity said: “Jordan Charles is black, about 5ft 9in, of medium build and with black hair.

“He is known to have links to Crawley and is thought to still frequent the area.

“He is also thought to have links to Bexhill and Croydon in south London.

“To support police with their investigation, Crimestoppers is offering a reward of up to £5,000 for information the charity exclusively receives – either online or by calling freephone 0800 555111 – that leads to the arrest of Jordan Charles.”

The charity’s regional manager for Sussex and Surrey, Glenys Balchin, said: “This man must be found before anyone else comes to harm, which is why we are making an urgent appeal to the public in Sussex, Surrey and south London to help find his location.

“Jordan Charles is dangerous and the allegations against him are serious.

“It is important to remind people that assisting somebody wanted for questioning over a crime can lead to prosecution.

“We are appealing to anybody who may know the whereabouts of Jordan Charles to urgently tell our charity what you know 100 per cent anonymously. Always.

“You can call our UK Contact Centre, which is open 24/7, on freephone number 0800 555111 or you can use our simple and secure anonymous online form.

“Crimestoppers has been taking crime information since our charity was formed over 32 years ago.

“Every day over a thousand people trust our charity with their anonymous information. Nobody will know you contacted us, only you.

“Information passed directly to police will not qualify for our reward. Only information passed to Crimestoppers using our untraceable anonymous online form or via our 0800 555111 freephone number will qualify.

“Please note, computer IP addresses are never traced and no one will ever know you contacted us.

“For telephone calls, we have no caller line display, no 1471 facility and have never traced a call.”