An attempt to keep advertising murals on the side of an ice cream shop has failed. 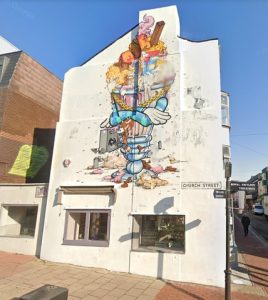 Global Street Art wanted to paint the murals on the side of the Gelato Gusto ice cream parlour on the corner of Gardner Street and Church Street.

But Brighton and Hove City Council turned down its planning application because the site is in the North Laine conservation area.

Global Street Art said that painted artworks did not require advertising consent from council planners in its application.

But the firm said that it was submitting its application to allow for sponsored murals with a “limited element of advertising”.

An image of an ice cream sundae currently adorns the site, which has previously featured promotions for Oatly ice cream, Bombay Sapphire gin and a joint promotion by Brighton and Hove Albion and Sky Sports in 2018.

The council head of planning Liz Hobden said in a letter to Global Street Art: “The proposed use of the site for the display of an advertisement (sponsored mural), by reason of the scale of the display area and the fact that the proposed advertisements would not relate to the host premises, would cause harm to the visual amenity of the North Laine conservation area street scene and the setting for the grade II listed building nos 6, 7 and 9 Church Street.”

Allowing the mural would be against council policy, she said.

The Brighton Society campaigned against the murals on social media when they appeared without planning consent.

The organisation did not formally oppose the plans but the North Laine Community Association did submit an objection.

The association said: “Its intention is obviously to use the public art excuse as a way of getting around the problem of getting approval for a blatant advertisement.”

The association was also critical of the suggestion the hand-painted murals had made a “positive contribution” to the community.

In its letter, with the writer’s details redacted by the council, the association said: “Residents and traders alike work hard to improve the area and care for their properties and premises.

“Graffiti is so rife that a few years ago an anti-tagging team was set up to remove it. There are many volunteers from both residents and traders.

“Murals come and go – mostly tagged within 24 hours – but none include advertisements. We don’t need advertising murals to generate a sense of community.”