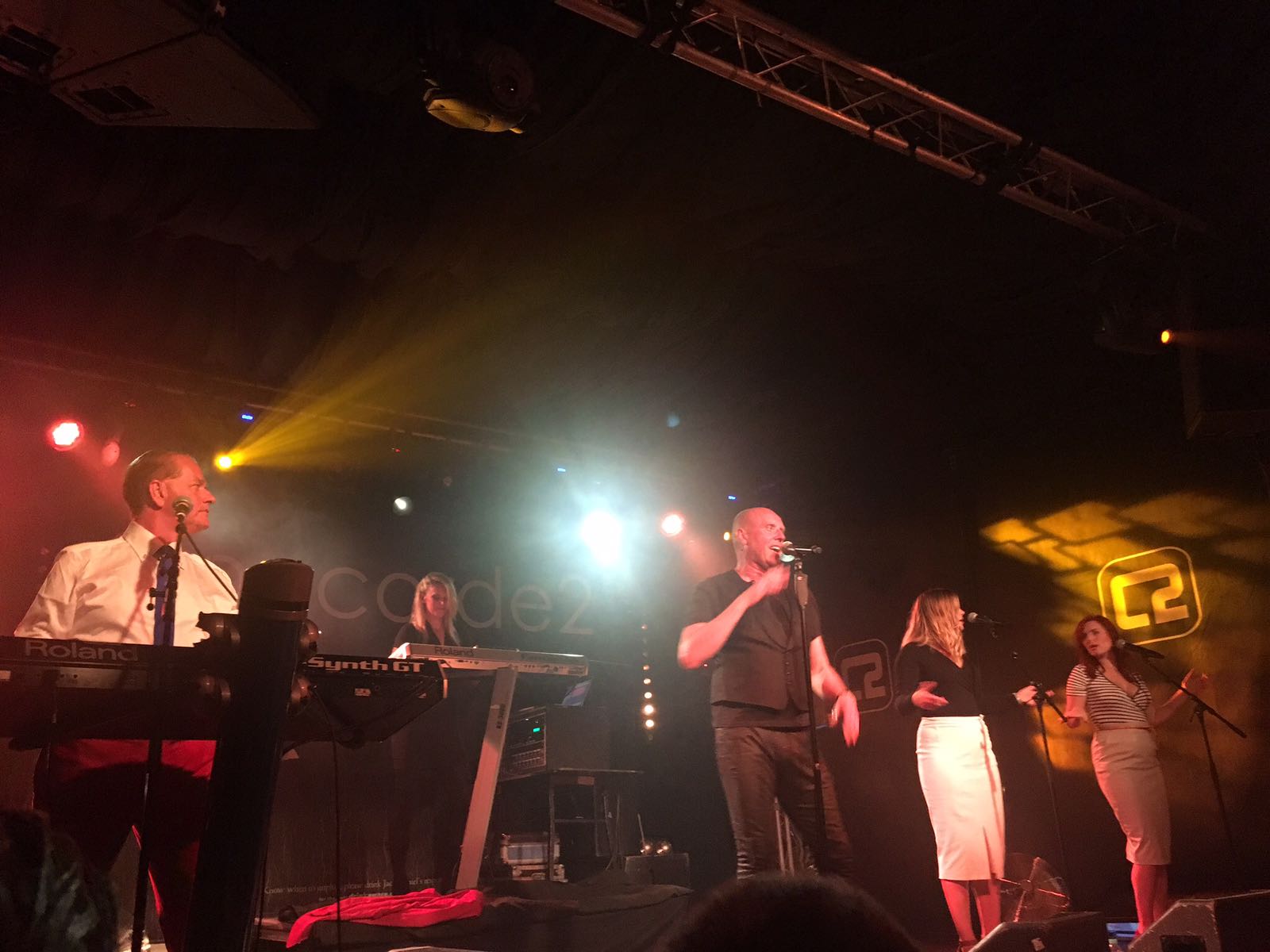 Prior to witnessing this evening’s Heaven 17 gig, things didn’t bode well for my review, as it was the concert immediately after the awe inspiring Kraftwerk 3-D concert at the Brighton Centre. Nothing would ever be able to compare with that! Errrrrrrr well actually, Heaven 17 were much better than I had anticipated.

I shouldn’t have doubted them really as I saw them perform at the same venue (the Concorde 2 right on the seafront) two years ago and they were great then too! It’s just that they started playing real concerts as a band as late as 1997, which was a massive 17 years after they had initially formed. Plus the fact that I was one of a few people that actually saw them perform a drunken PA gig at the Pink Coconut (which used to be located at the bottom of West Street in Brighton) way back in the early 1980’s. The three guys Glenn Gregory, Martyn Ware and Ian Craig Marsh (who left the band in 2007) just stood there in a row and sang over the backing tracks of just three of their songs and then staggered off the stage. I was a massive fan of them then, but I was far from impressed with that gig. I mean keyboardists Martyn and Ian had not long jumped ship from The Human League in 1980 and thus left Phil Oakey and Philip Adrian Wright high and dry on the keyboards front and yet they didn’t play live – oh well move on! 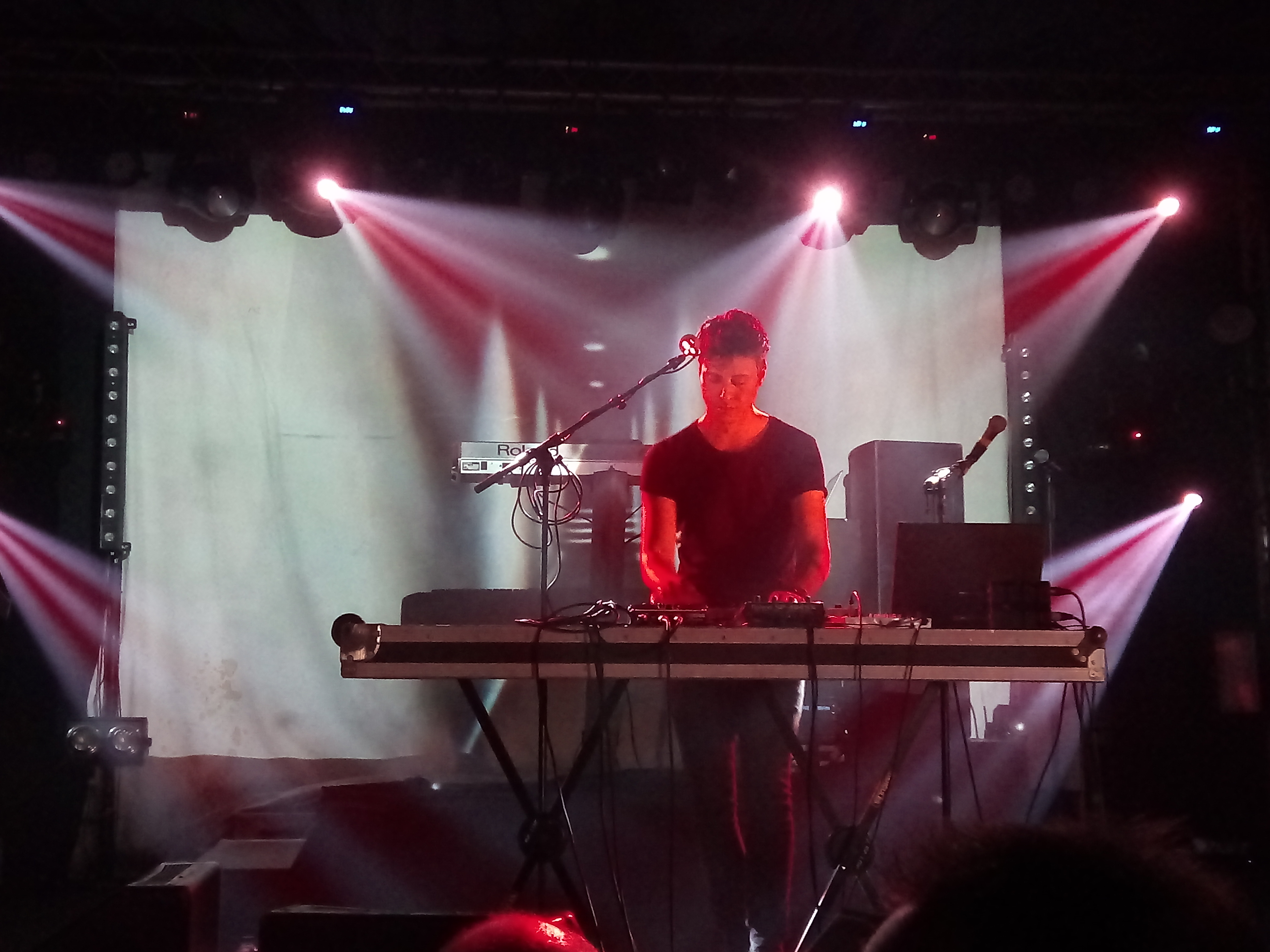 Tonight’s proceedings were kicked off by a one man electronic band called Bernholz. Bernholz is actually his surname and his christian name is Jez. He was telling me that he was based in Nottingham and that he had also supported Blancmange. His sound was very experimental, just as The Human League Mk1 was back in the day. To me he sounded like a combination three singular artists, namely Bayonne, TR/ST (Trust) and Gazelle Twin. Although I appreciated his compositions and backing films as something that would equally easily sit in an art museum, I felt that this was totally lost on a majority of the middle-age Radio 2 mums and dads in the audience. Some of whom were no doubt there solely as they had heard and liked ‘Temptation’ by Heaven 17. The lady next to me in the crowd quipped after I had come to this conclusion that he (Bernholz) thinks that he is in his bedroom! Jez would have been a lot less nervous there my dear! In my opinion, he was brave standing up in front of us lot, so well done to him. 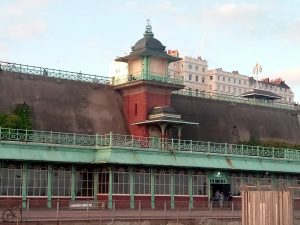 On the dot of 9pm, Heaven 17 (who formed in 1980 and got their name from A Clockwork Orange film) arrived to rapturous applause from the crowd. These days musically they are solely Glenn and Martyn, but on live work they have assistance from three talented girls, one on keyboards and two backing singers.

I was concerned as it stated that there was a curfew at 10:15pm, which meant that there would only be a 75 minute set, which would not be long enough. I was proved correct with my assumption as they had to alas drop three tracks for their setlist (We Live So Fast, Height Of The Fighting and their version of The Associates Party Fears Two).

There is a definite chemistry between Glenn and Martyn as singer Glenn tends to take the mickey out of Martyn, but in a nice way. This banter was enjoyed by the crowd who warmed to the band very much indeed. Well, I mean it was a Saturday night and it was a sold out gig! 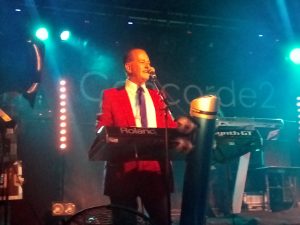 First up was a Mk1 Human League song called Circus Of Death which appears on the 1979 album Reproduction. Then the often banned in it’s day 1981 debut single (We Don’t Need This) Fascist Groove Thang was given an outing. It was swiftly followed by the opening track of their second album The Luxury Gap, namely Crushed By The Wheels Of Industry. Whoo whoo went the crowd!

Two songs from their debut 1981 Penthouse And Pavement album were performed next, Geisha Boys And Temple Girls and Let’s All Make A Bomb. To me the cover artwork to that album is very iconic. If there was ever an album that screamed yuppie, then this was it. But I guess that was deliberately so from these working class Sheffield lads.

Two more singles were next in the form of Come Live With Me and the very danceable Play To Win. I have to say that the latter track was a highlight of a most enjoyable set. They slowed the beat right down as they performed the old classic You’ve Lost That Loving Feeling which the early Human League had covered. 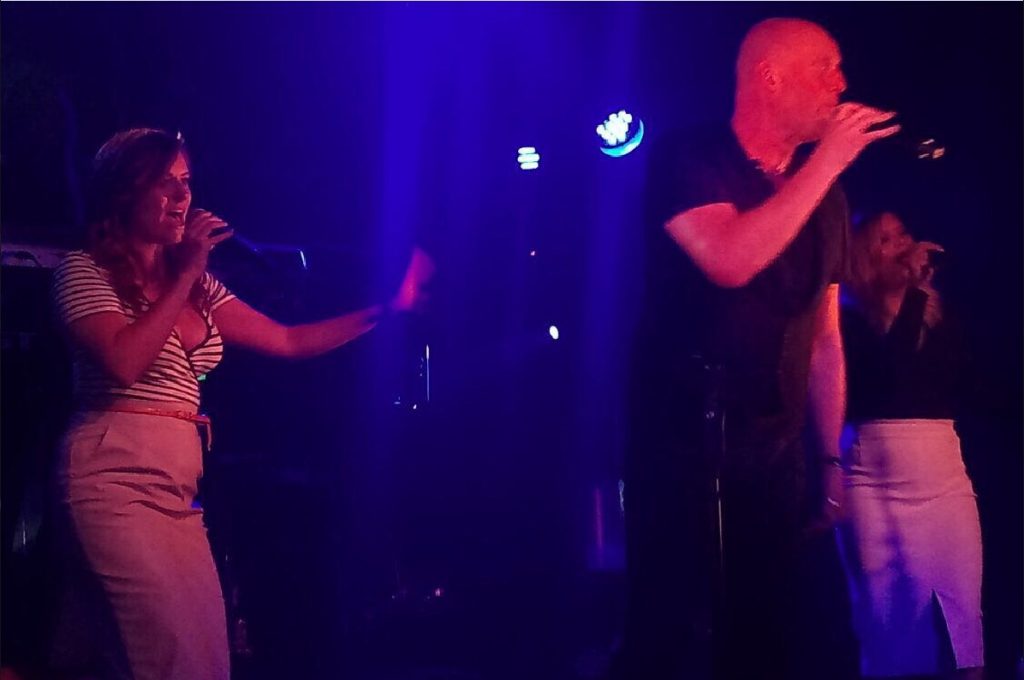 The next song I’m Gonna Make You Fall In Love With Me, from their 2005 album Before After, was the choice of Kelly Barnes who was one of the two backing singers. The other lady being Hayley Williams (not the one in Paramore). Both of which are talented professional backing singers that are based in and around Brighton. Hayley also sings backing with Marc Almond when he goes on tour.

Then an awesome surprise as this British electro-pop band gave a rare outing for their 1981 single I’m Your Money. This amazingly never charted and I can remember buying it on the day of its release and it is my favourite Heaven 17 song. I think I might be the only fan to say this. Martyn tonight told the crowd that it was inspired by hearing Giorgio Moroder in 1978. He was the sound behind many a Donna Summer hit including I Feel Love.

The band performed their rendition of David Bowie’s Boys Keep Swinging next, which went down rather well as did the following song Let Me Go! Glenn told the crowd that Let Me Go! was both his and Martyn’s favourite Heaven 17 song and they certainly gave it justice tonight and I would say that it just shaded as the best song of the night.

The title track of their debut album Penthouse And Pavement was next. It was then followed by their most famous song Temptation. Which incidentally was kept off of the number one slot in the UK singles charts by Spandau Ballet’s True. Their rendition was to virtually all of tonight’s crowd the highlight of the night, with Kelly and Hayley really going for it. Boy their lungs must hurt. There was only time for one more track and that was the excellent Human League single Being Boiled.

So all in all an enjoyable evening. Thanks guys! 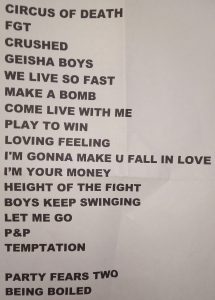 Circus Of Death, (We Don’t Need This) Fascist Groove Thang, Crushed By The Wheels Of Industry, Geisha Boys And Temple Girls, Let’s All Make A Bomb, Come Live With Me, Play To Win, You’ve Lost That Loving Feeling, I’m Gonna Make You Fall In Love With Me, I’m Your Money, Boys Keep Swinging, Let Me Go!, Penthouse And Pavement, Temptation, Being Boiled

For more information on tonight’s artists visit: https://www.heaven17.com/ and

If you enjoy synth music like Heaven 17, then the chances are that you will also enjoy the bands listed below. Simply click on each of the names and they will take you to our concert reviews on those bands: