Penelope Isles – their 100th gig of the year report 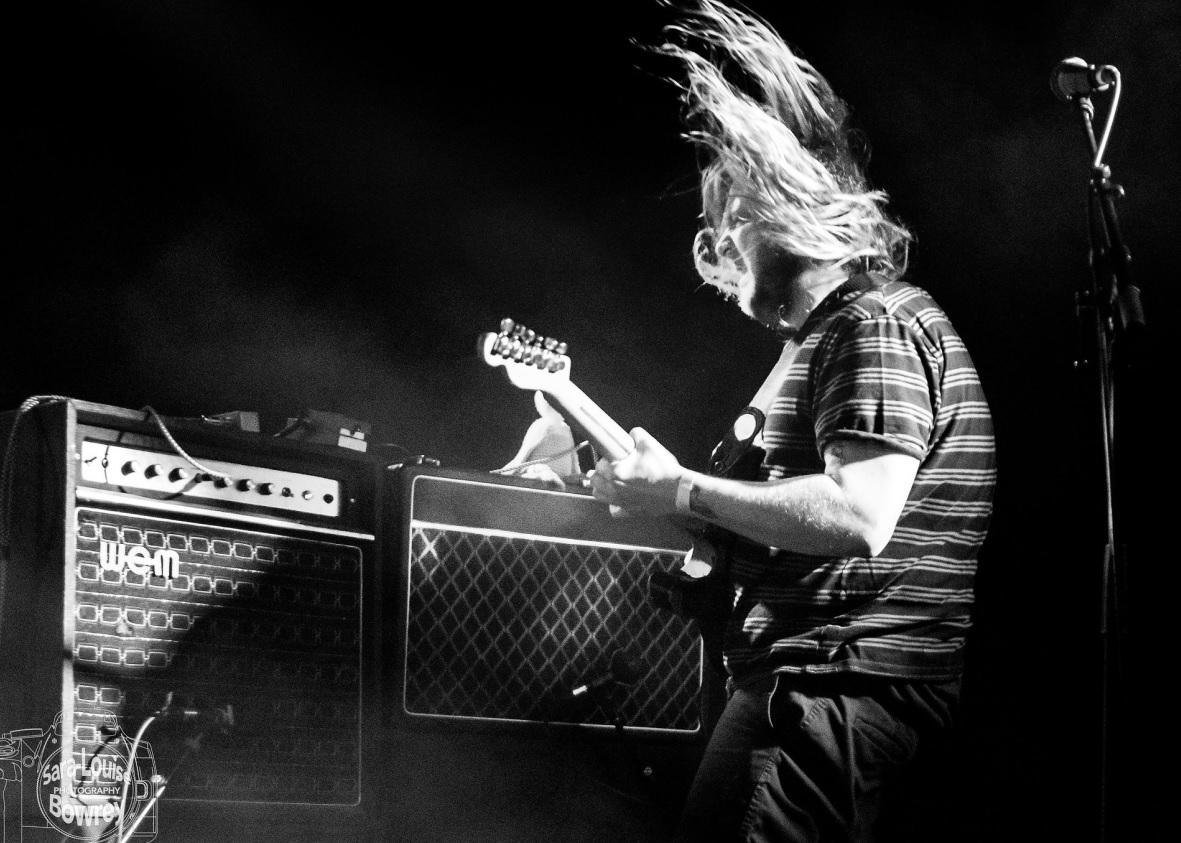 Jack Wolter from Penelope Isles getting in the groove at CHALK, Brighton 11.12.19 (pic Sara-Louise Bowrey Photography) (click on pic to enlarge!)

Well what can we say about Lily Wolter, Becky Redford, Jack Sowton and Jack Wolter aka Penelope Isles that we haven’t said before? We have witnessed the Brighton based Isle Of Man imports grow and grow over the last couple of years and the signs are very encouraging for this likeable quartet.

As is often the case with certain bands and artists, they get to where they are today through hard work and getting their name out there. This is clearly the case with Penelope Isles as tonight at CHALK in Brighton is the band’s centenary concert of the year and their last one until Friday 10th January when they will be appearing at ‘Rockaway Beach’ at Butin’s Bognor with The Jesus and Mary Chain, John Cale, SOAK, The Wedding Present, Fontaines D.C., Hey Colossus, Heavy Lungs, Rascalton, Brix and the Extricated, International Teachers of Pop, Melys, Black Country New Road, The Vegan Leather, Adwaith, Indian Queens, The Sweet Release of Death, Eyesore & The Jinx, Scrounge, Steve Lamacq, and The Pagans S.O.H..

Their perseverance has paid off already, as they have signed to ‘in the know’ Brighton based label Bella Union, which is owned by former Cocteau Twin Simon Raymonde, who was present this evening on ‘loudly spinning the decks duty’.

Last July saw the release of their debut album ‘Until The Tide Creeps In’. The 10 track disc is available in vinyl, CD as well as on cassette – order yours HERE. Simon Raymonde is very excited about the band as he believes that they are “Truly one of the most exciting young bands in the UK in the last 5 years”.

An “exciting young band” indeed. This bears witness to the fact that tonight’s CHALK concert has sold out! This is very impressive and a milestone for the band. I was positioned at the very front of the nice new stage and could clearly see that Lily was moved by the enormity of the occasion, which was so pleasing to see.

Clearly this is a band that are now firmly on the music press radar, as I reckon that there were around a dozen professional photographers positioned in a long line at the front of the mixed age crowd. 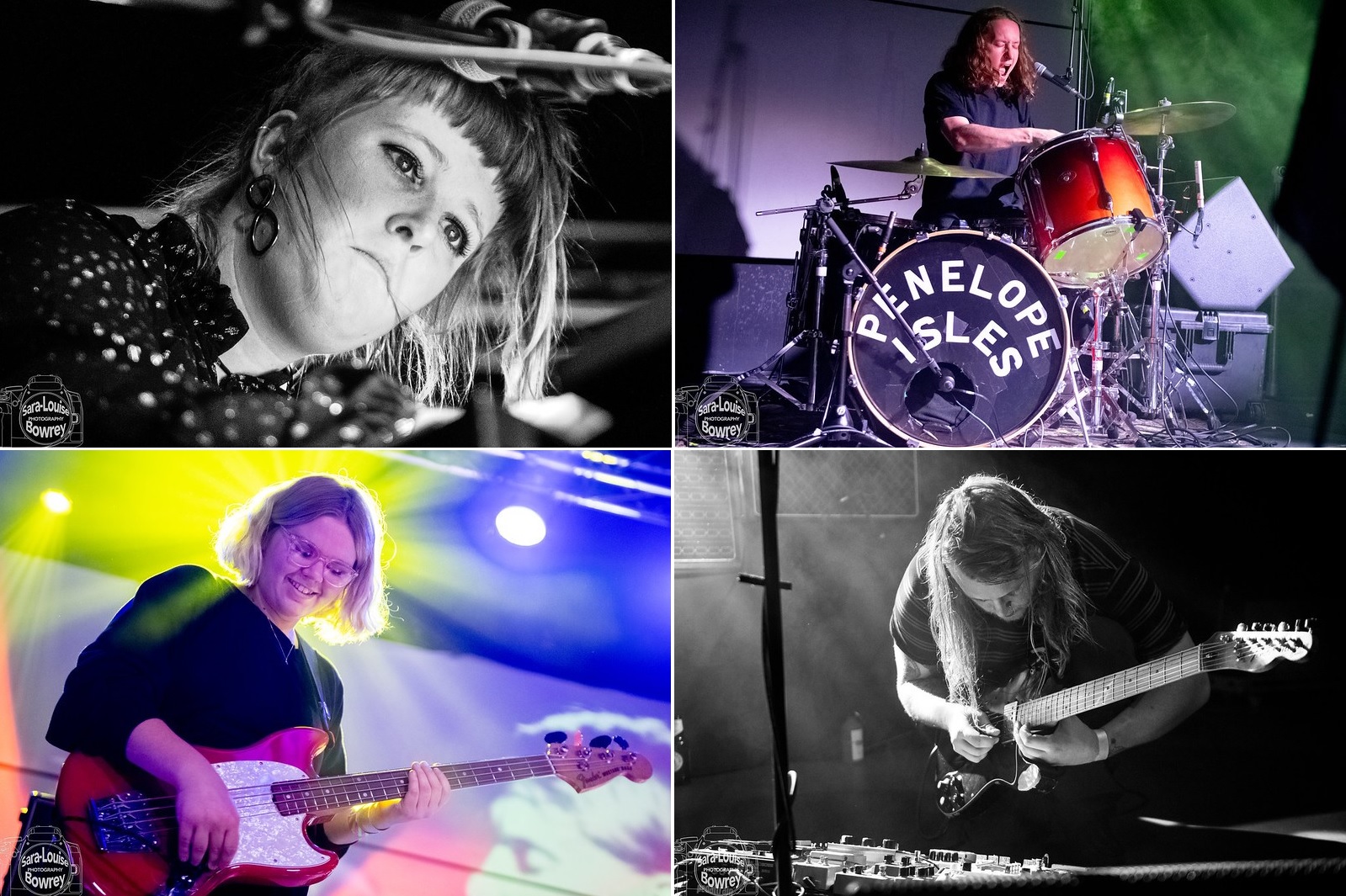 The Penelope Isles performance commenced at 8:45pm and concluded at 10:02pm. We were served ten tracks during that period with no encore, as there wasn’t time for one and it’s not really their thing. Eight of the songs were from their album and quite possibly the other two are unreleased compositions.

Prior to them walking on stage, a film was played on the rear wall behind the band. The opening black and white film was a montage of seaside shots, which was made by the band using antique found footage from the Isle of Man. Their live performance visuals were mixed by the guys at Innerstrings. This included a live feed of the band, so that we could see their faces behind them, but in the traditional Innerstrings psychedelic swirly colours style.

They kicked off with the reasonably quiet ‘Sailing Still’, which builds as it goes along. They now already look like a polished band as compared with the previous outings that we have witnessed. It might have something to do with the other 99 concerts that they have played this year.

After a while the sharp guitar plucks from Becky signals it’s time for the jerky ‘Cut Your Hair’ which is always one of the highlights of their performances. As the set processes it has a smoother floaty feel to it, especially on ‘Underwater Record Store’, which I have to say they seriously pulled off tonight. The lyrics do somehow remind me of The Beatles ‘Across The Universe’ from the ‘Let It Be’ album – “Nothing’s gonna change my world, Nothing’s gonna change my world…”

A selection of further songs from the debut Penelope Isles album follow, until we arrive at their penultimate track, which really seriously needs to be their final song of the set for 2020 gigs one hopes, that being the awe inspiring ‘Gnarebone’. Which was given a seriously great extended 12” remix tonight, including an interlude and reappearance of second support artist ‘Itchy Kid’, who added spoken poetry and off the Isles were again into psychedelia land. This has always been my favourite of theirs and judging by the crowds reaction, I am certainly not alone. It was epic and felt as though it lasted 15 minutes! You know what! It’s probably did!

The final number was a drawn out version of ‘Three’, and although in a similar vein to ‘Gnarebone’, doesn’t quite hit it’s heights. But hey, the Isles are a fun band as can be seen by their recent ‘life on the road videos series – watch the latest one HERE. 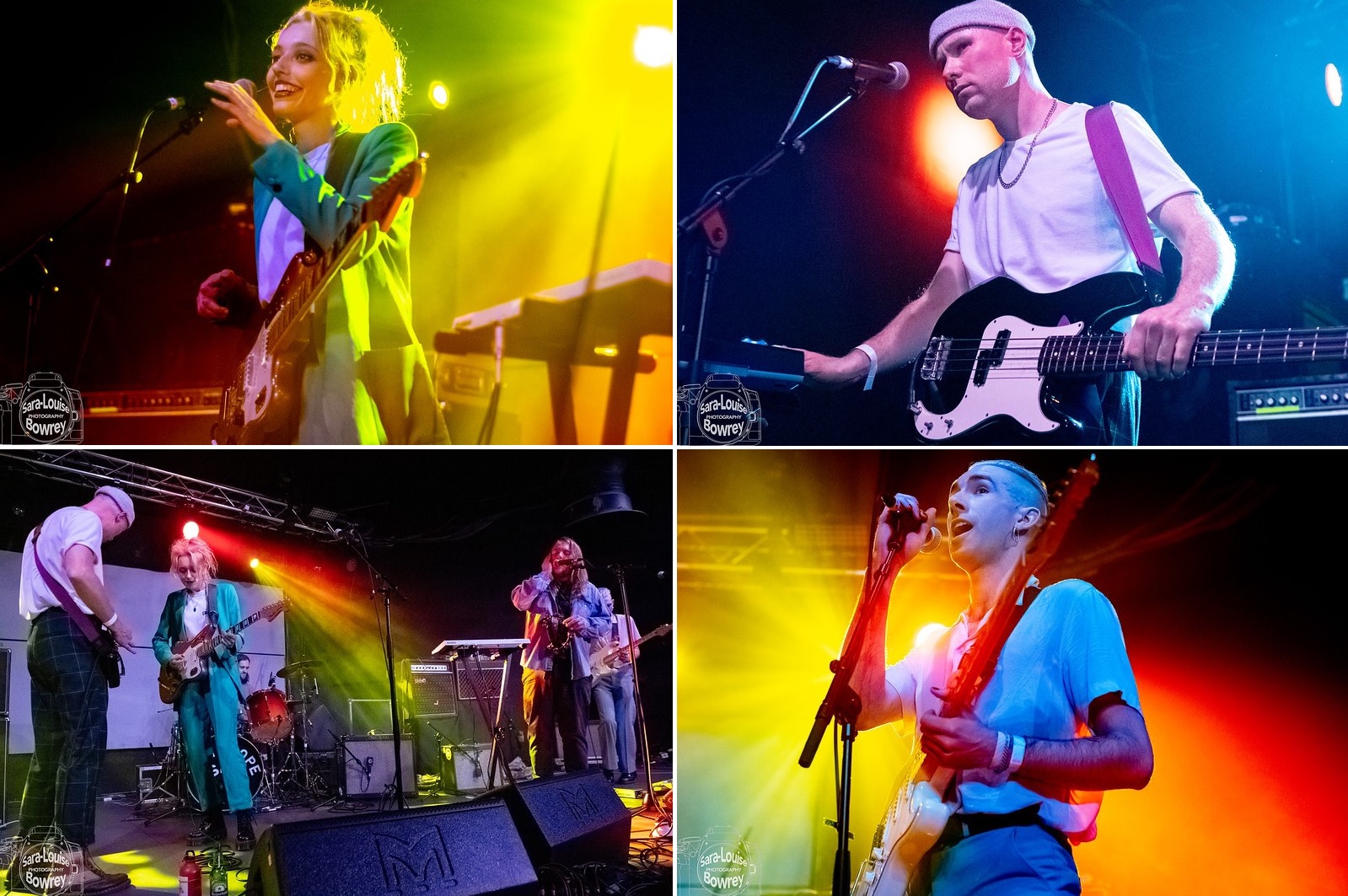 Support this evening came from Brighton based CIEL (which is pronounced “She-Elle”) and as their wonderfully named Spanish guitarist Jorge Bela Jimenez reminded us, that they too have been on a musical journey and next week will be celebrating their first birthday since their live debut. Yes fans, we were there at the beginning – read our review of their debut concert on 19th December 2018 HERE.

It was a pleasure to be able to watch Dutch born Michelle Hindriks shoegaze brainchild
(CIEL) performing on a large stage and the punters applauding their work. Their sound was full on crisp, particularly the Novation and Yamaha keyboards. However, I would like to single out Lawrie Miller’s drumming on ‘Awake’ which was the highlight of their eight song set. Although their final number ‘The Shore’ is a corker too! We can look forward to that coming out with the other two final numbers from tonight (‘It’s Not All The Same’ and ‘Same Old Times With U’) as an EP early in 2020 on 22nd January. The producer on this was none other than Penelope Isles Jack Wolter, who briefly joined CIEL on stage this evening on backing vocals, in order to give them his approval. You can see them live next in Brighton on 17th January at The Hope & Ruin – details HERE.

CIEL setlist reads:
‘Castles’
‘Days’
‘Acrophobia’
‘Pictures’
‘Awake’
‘It’s Not All The Same’
‘Same Old Times With U’
‘The Shore’

Listen to CIEL on their Bandcamp page. 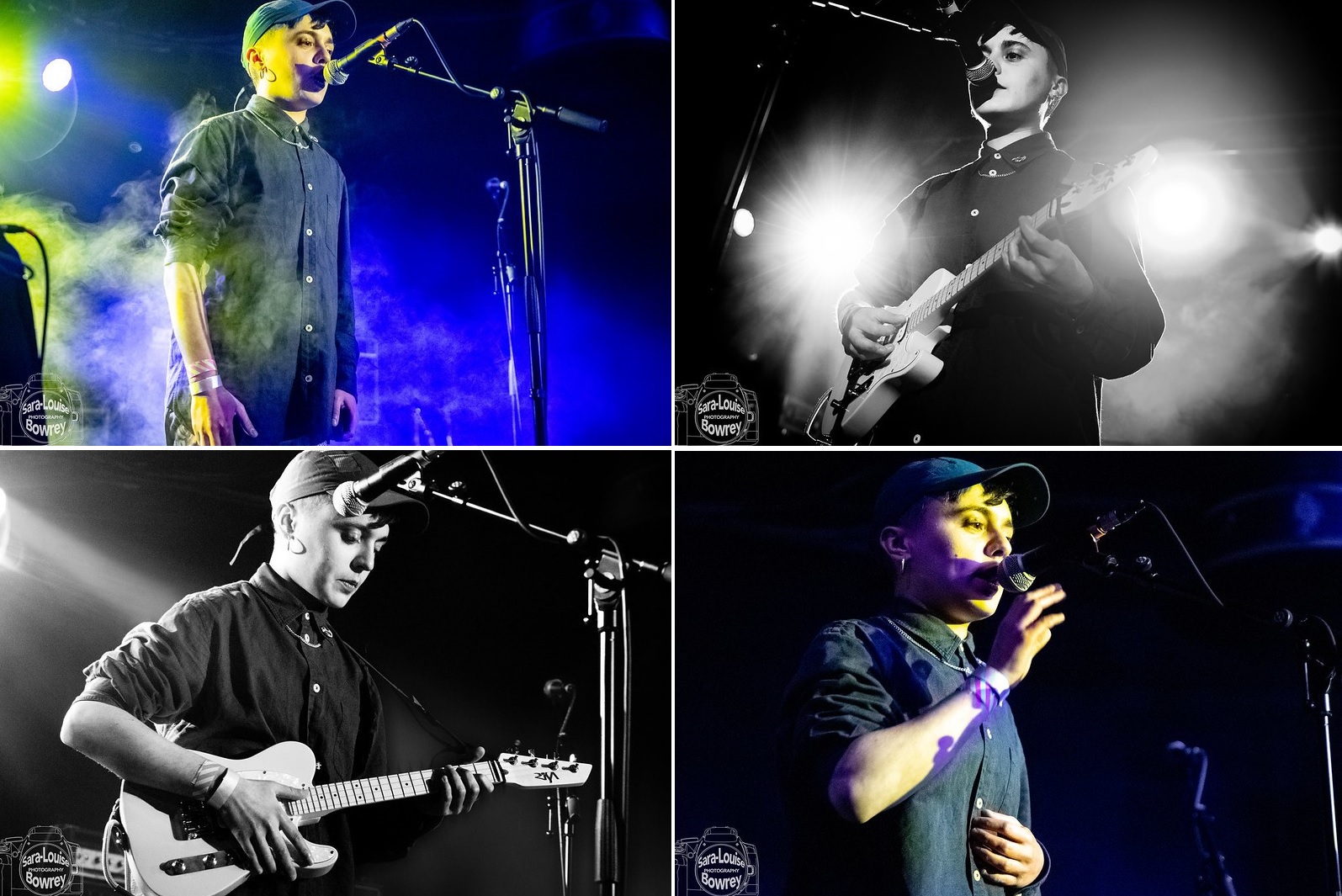 Just prior to Penelope Isles coming on, we were treated to a brief 5 minute debut appearance from Itchy Kid, who gave us two compositions of spoken poetry rap. I currently have no details about this person, but I liked the incorporation of the lyrics “Chicken Jalfrezi” into one of the tunes. 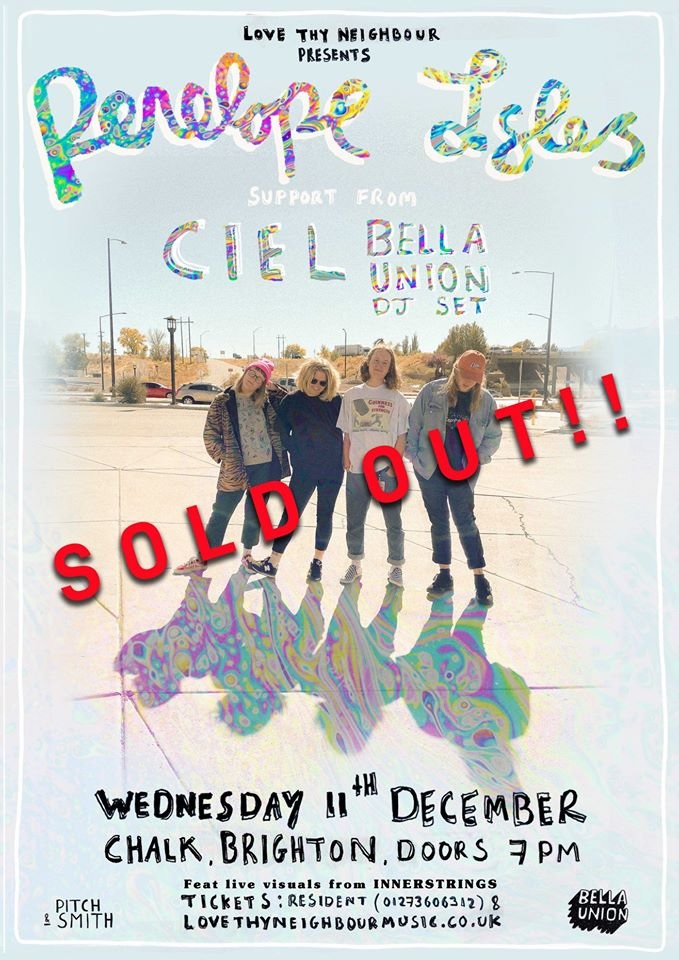 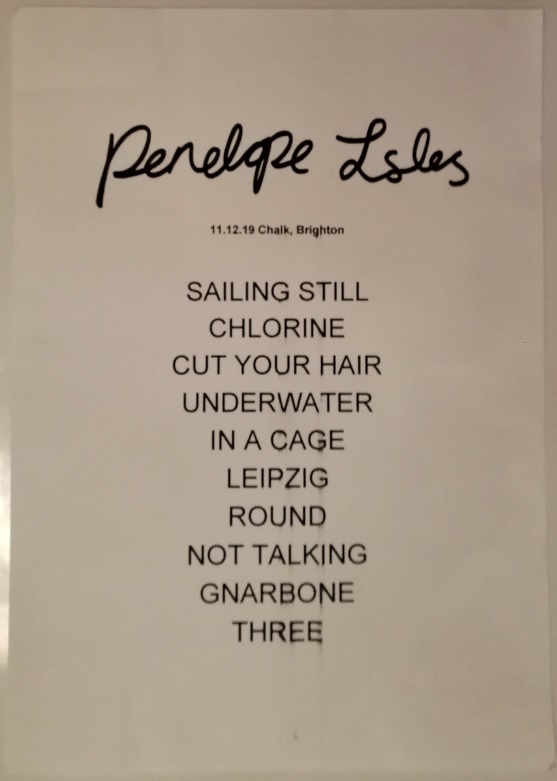 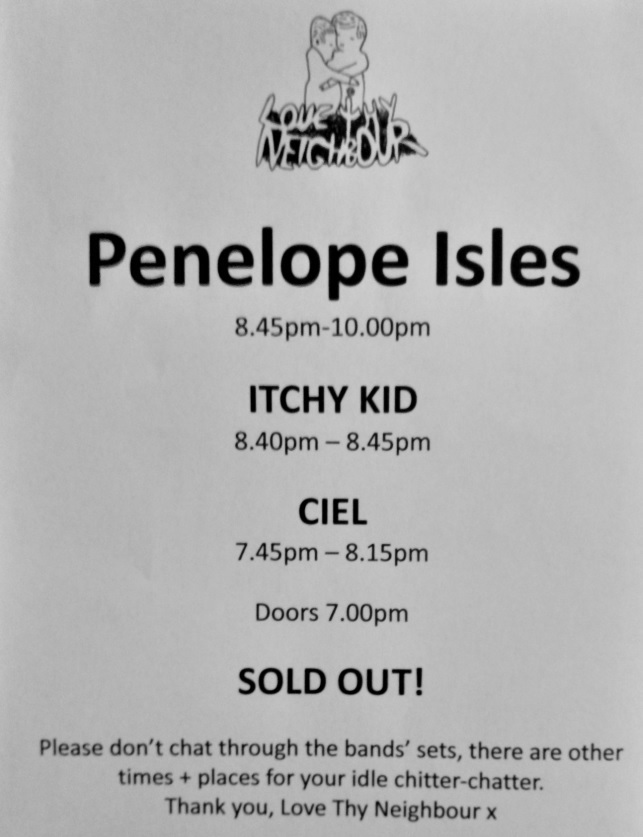